Across the United States, affordable housing appears seldom as of late. Affordable housing, meaning that the cost of a home does not exceed the average household income in that neighborhood, otherwise known as the median income. Different designers and the likes hope to solve the problem by doing different urban studies in their area to make an informed decision on potential designs that lead towards a solution.

Researching potential sites focused mostly in central and downtown Las Vegas, the most undeveloped areas concentrated around freeways, which makes sense. The only issue with building within a close proximity of these freeways is the constant noise and heavy amount of traffic in the area, creating a potential problem with marketing those homes. However, one site in particular stood out, relatively close to the freeways. Just between Washington Avenue and Martin Luther King Boulevard, multiple lots of land were in the area. Conveniently enough, these lots situated themselves in an accessible part of town, complete with ease of access to a shopping district, churches, a recreation center, both an elementary and high school, various bus routes, and easy entrance to the freeway.

Based off the different parcels in the area, the house and lot prices tend to vary between $20,000, and $45,000. However, these exist a few extremes that dip into six figures, but for the sake of the overall median income of the neighborhood, the average is roughly around $30,000. In terms of lot size, they varied from .5 acres to 1.2 acres, with the average being .7 acres. What is most surprising about this neighborhood is that most of the extra acre space is not used at all, meaning that landscaping in this locale was not a major priority.

There was also the prospect of looking at Blue Diamond on the far south side of town. With little development in this side of town, the only issue with installing a prototype home into this area would being able to market it when the area is far away from the main city. In time, if enough houses and developments are made in the area, Blue Diamond could become a potential hotspot for creating affordable housing, but at the moment, its inconvenienced by the lack of amenities in the immediate area.

A new alternative came just recently for a site. For this new site, the location is in the neighborhood behind the old Huntridge Theatre. From different perspectives from people who lived in the area, along with personal research, this section of town along East Charleston is going through a phase of revitalization and rebuilding. I knew this to be true, because on Earl Street, the house I used to live in went through a complete redesign. In fact, most of the houses on that street changed dramatically from what I remembered them to be, which reinforces the idea that the area is going through a complete makeover. 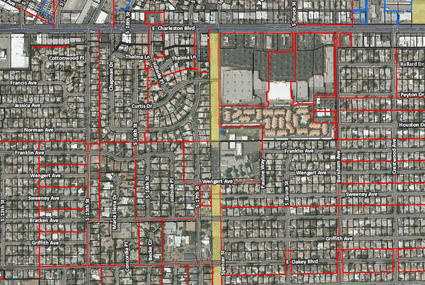 This was the location I took the most interest in when it came to affordable housing. 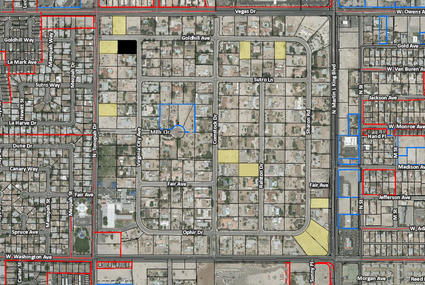 This complex, while convenient to access and do research on, didn't strike me as too interesting. 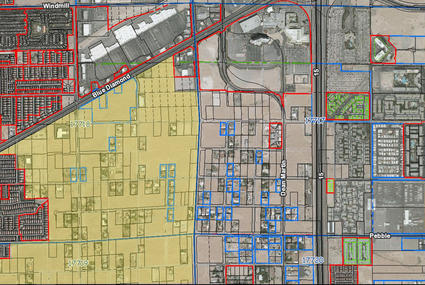 Originally, I had the most interest in creating an entire complex of my house design.

Cutting down on amenity costs, such as electricity and water, is key to creating a more affordable house. In addition, a house with a much smaller square footage could also lend itself to being convenient in costs, as larger homes tend to border or exceed the median income. In short, sustainability and size are key to cutting costs in home fees.

The rising trend in tiny houses helped in brainstorming ideas. Tiny houses minimalizes as much space as possible, while still maintaining the essentials of a building. With clever placement of furniture and shelving, anyone could live a normal lifestyle in these convenient housing spaces. Making the space as compact as possible reduces costs in construction, but also forces careful placement of rooms without shaving off necessary space.

Because this house is being designed in the southwest, the benefits of having photovoltaics helps tremendously in providing energy. Potentially putting in photovoltaics could help in sustainability and cutting costs for energy. The problem with this is initial cost, placement, and overall aesthetic. Placement relies on the orientation of the house, and exposing them on a building could lead to some jarring display. Even with using a façade of parapet roofing, the panels would not be completely covered. Photovoltaic panels are expensive, and having them pay off over time could not be completely worth it, depending on where in the United States this home is located in. One solution to making these panels more discreet would be the usage of photovoltaic glass windows, but that leads to the problem that only certain parts of the house would only be getting so much sunlight, thus the investment and loss of energy opportunity is lost.

On the subject of energy, having a tankless water heater could have its benefits. With taking up less space, and also providing more on-demand hot water, using a tankless water heater wastes less energy than a traditional water heater. Coupling this with having the water heater be centralized in the building, equal water distribution could happen among all water fixtures, thus reducing the amount of water wasted, which in turn cuts costs on water. Alternatively, why not go smaller? Instead of one universal water heater for the whole house, why not use mini water heaters for each faucet in the house? Hot water would be instantaneous, servicing only one faucet, and require little energy to power since it is dedicated to one faucet, therefore allowing for less water and energy loss.

Creating a courtyard in the middle of the house leads to some natural ventilation. The main design in question will be shaped like a U, meaning that there will be an open courtyard in the middle that connects to all sections of the house. In this courtyard, cool air would be allowed to flow down into this area, and with proper fenestration placement, enter into the house. Creating a house like this will reduce the need for a conventional air conditioner, thus saving money year-round, and also providing comfortable living.

Water usage is essential for any function regardless, so being able to reuse it is only appropriate. While its true that Nevada does not get as much annual rainfall as other states, this system will not benefit in this region. However, in other regions such as Washington, this design could a godscend: a recyclable greywater system using rainwater. In the exposed courtyard, water will flow into a drain pipe that will first enter a mesh wire filter. From there, the rainwater will seep through a series of different earth, starting with gravel, then charcoal, then sand, then gravel again, until it reaches an underground reservoir. From there, water gets piped from that reservoir to where it needs to go. Like stated earlier, this system only benefits in regions where rain dominates the climate, but this could potentially supplement the lack of sunlight in those areas in favor of a water renewing system.

Insulation in a building can help to prevent energy loss depending on the R-value. With new insulation trends rising, Aerogel as a wall insulator could have some potential benefits over fiberglass insulation, such as better air quality. 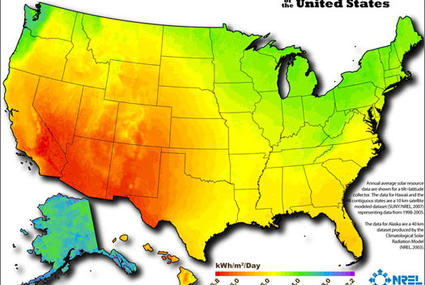 Photovoltaic Overview across the United States.

This map shows the regions most appropriate for installing photovoltaics. 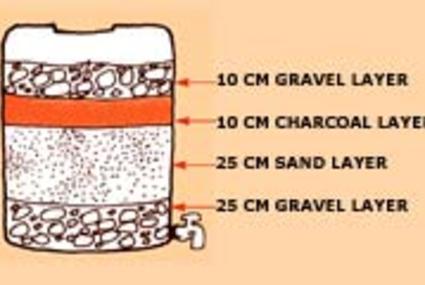 A lot of my research stemmed primarily from looking around the LEED website. 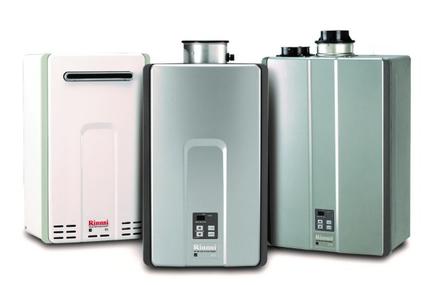 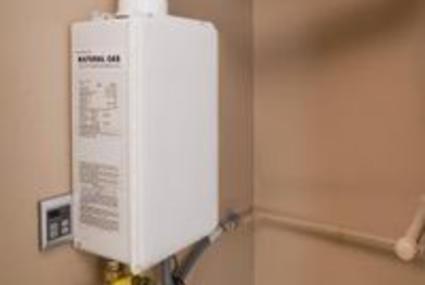 I became entranced with the idea that maybe one major water heater wasn't the way to go. 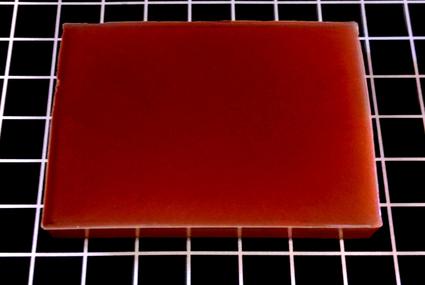 The major driving point in this design is to create a single-family household that meets the certification requirements for a LEED Gold or LEED Platinum. One component in this design that creates a natural ventilation system and reuseable water system is an open courtyard in the center of the building. Air follows a specific cycle where heat rises up, and then cool air lowers down. By using certain strategies in fenestration and room placement, the effect of the open courtyard will create a natural cooling effect inside of the house, reducing the need for air conditioning, and therefore cutting energy usage. In conjunction to the natural ventilation, if this universal house design were to be installed in a location with a more rainy climate, the house could benefit from an underground reservoir system. The inside courtyard will be concave in the center, directing all water into a drain that leads straight into an underground reservoir that recycles into the main plumbing in something akin to a greywater system.

Another agenda relevant to the construction of this building is the usage of an energy and cost efficient wall material with a high r-value and durable material. Coupling this high r-value alongside the natural ventilation method previously stated, the need for an air conditioning system would be obsolete, since the insulated walls would be able to trap hot air within the building, and the fenestration leading into the central courtyard provides as a means of cooling.

In order to promote an even further green design for this home, along with reducing costs, using electric stoves as a means to cut down on natural gas helps to better the environment. Gas stoves, while convenient, could pose potential dangers not only to the environment, but if a gas line were to be broken, could lead to a house fire. Electric stoves avoid this danger entirely, providing a more safe alternative to gas stoves.

Lastly, as a means to give back to the grid, installing a photovoltaic system further benefits this design’s vision of being green and cost efficient. Returning electricity back to the grid has its benefits of paying the owner money for being able to provide its own energy, instead of using energy from a local power company. This effectively cuts down having to pay a monthly electric bill, therefore generating more revenue, and ultimately making the home affordable for anyone.

To summarize, here are all the major design components I implemented: 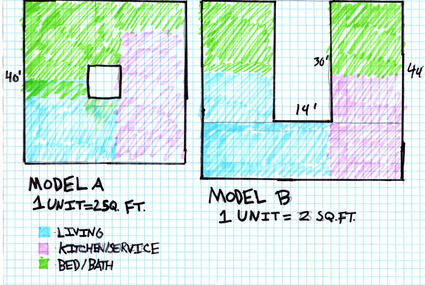 This was the first two original shells I planned for my house. 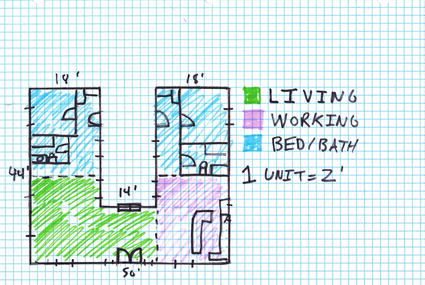 This is the Floor Plan made after my initial design with the cubic home. 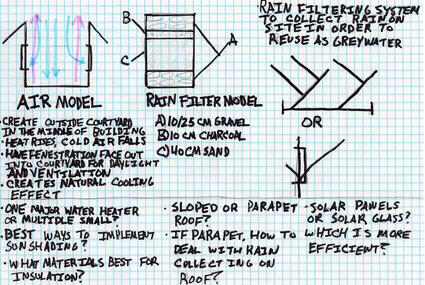 This sketch was purely made as notes for while I was doing research, and also putting pen to pape 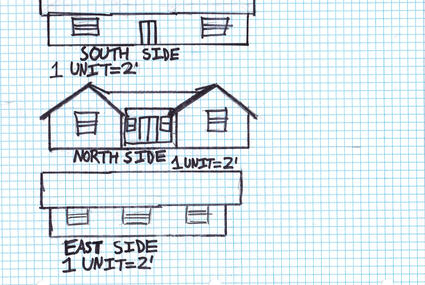 Just some standard run-of-the-mill sketches, elevations, although I believe it would be more mean

Here are all the final products/renderings of the home that will be submitted. All of these buildings were modeled out in Revit, but rendered in Photoshop. Looking back, I wish I could have made some of the features of my home a lot more apparent, but unfortunately aspects of my home were relegated to being purely contextual, rather than physical. That's the only negative I could think of in terms of my shortcomings. As a whole, I had a lot of fun with doing research and learning how to use Photoshop. Using LEED as a basis for my design process gave me a new perspective on research, which resulted in a greater emphasis on green, eco-friendly choices in design to reduce costs. Not all of the research was fun to do; researching the best sites gave me difficulties on which location would be best. Photoshop had its perks, but with my little experience, I could not use it to its full potential. A lot of the renders look somewhat fake, but they were still fun to do, and gave a lot more life than the standard Revit renders. This was a fun project to do, regardless of the outcome of my results. 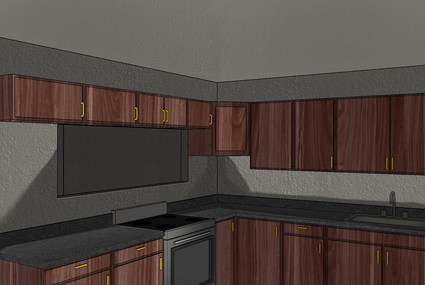 I'm really proud of how this render turned out. 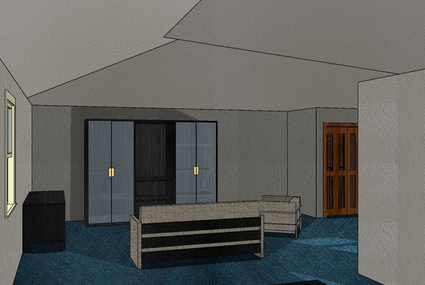 This render had much better shadow manipulation than the kitchen render. 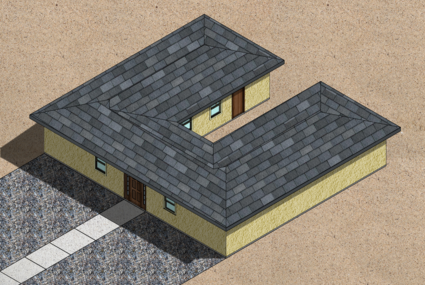 This render could have been a great opportunity to highlight more of the outdoor courtyard, but t 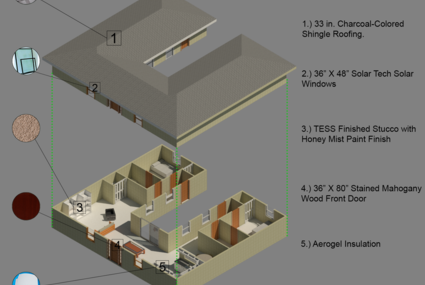 A general exploded section of my home.