Lack of affordable housing is a serious issue, especially for low income families. Many residents in the Las Vegas valley have families and children whom they need space for. Nice housing is often overpriced and in areas distant to potential work places. I know this from personal experience and from talking to others who also live in the valley. Having housing with those resources, along with others (such as school, public facilities, etc.), within walking distance would be useful for those of low income who are perhaps dependent on public transportation and walking. With that stated, my goal is to create housing that is of reasonable pricing, good location, is effective for a family, and is appealing so the client can be proud of the home they have.

Collecting information, for me, focused primarily on choosing a client and a location based on that client. Besides that, needs and wants of the client was researched through talking with local residents. Potential housing orientation is also considered here. Once a location and client are determined as well as how to make the best of natural lighting that would be on the housing, ideas for the buildings design itself can then be found later on.

Originally, for the clientele, I had targeted college students. This was partially due to personal interest. As a student who will soon be going to college and as a student who also knows many college students (friends of mine and my family members), I am aware of the issue that some of the college youth has in finding affordable housing options since dorming can be expensive and it can be hard finding somewhere off campus to live with a reasonable price and proximity to the college (for those who lack the option of dorming or do not want to dorm at all). With that in mind, I chose the location; a plot of land that was very close to the College of Southern Nevada (CSN) campus off of Charleston in Las Vegas, NV. This was done to satisfy the college students that are looking for those housing alternatives.

Upon further research, I decided keep a location under the same zip code but to change the location of the plot because I wanted to change the targeted clientele to families. This is because I had found that, under the zip code 89146, 33% of the residents are between the ages of 40-64%. The second majority of the area, those between the ages of 25-39, consist of 24% of the residents. Considering there are more of older ages rather than just the college youth within the area that need affordable housing, it seemed more appropriate. The area under the zip code was also still appropriate due to the surplus of potential work places (from the shopping districts), public transportation being close, and public facilities such as parks, schools, medical centers, and a library being nearby and most within reasonable walking distance. The housing on the plot itself also is already of reasonable price. Creating more functional housing that is both appealing and affordable here would be beneficial to the community and the needs of that majority within it.

The Original Intended Location and Clientele

Originally, majority of the research had targeted that original clientele of college students. 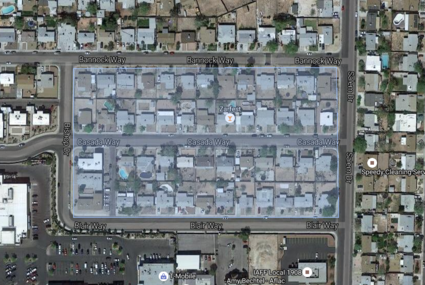 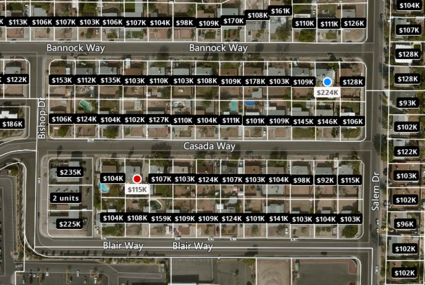 Housing at the Chosen Location

Upon picking the new site housing value of the plot was considered.

The Location and Nearby Resources for the Clientele

The location is marked at Salem Dr and Blair Way. Useful locations for the chosen clientele are a 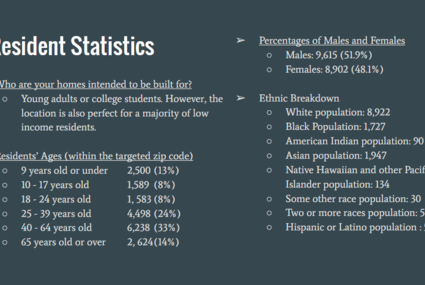 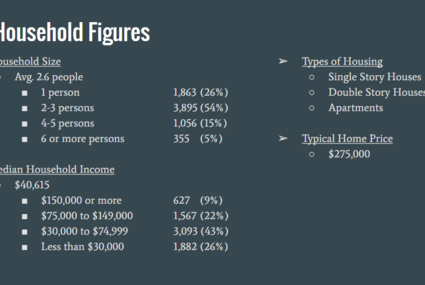 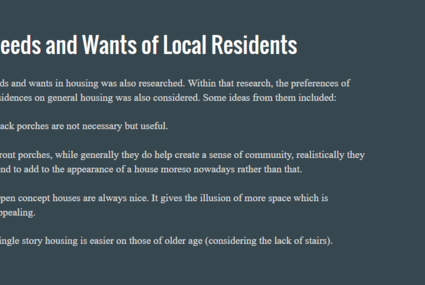 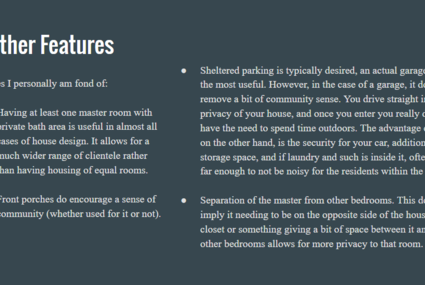 The purpose of the housing designs are to be cost efficient and appealing. The proposed designs are simple and either square or rectangular in overall shape for the sake of being more cost efficient. While this may seem dull, financially it is a better decision. Visual appeals can be made up in the buildings facade.

The building itself will be built on a flat lot and the exterior walls will be built of Concrete Masonry Units (CMU's). In a “simple box” design, as I aim for, a one-story home made of such material could be less expensive that wood frame due to the ease of its construction. By the use of CMU's, the house will also be more soundproof from that material, as that is a concern due to the housings proximity to a busy street and a shopping district.

Initial designs were created focusing on the original clientele. With that stated, the designs had rooms of very similar sizes for the purpose of equality in rooms for college students. Upon changing the clientele, the designs were found still acceptable but needed modification. Issues over room sizes could be solved by extending walls to create larger rooms. Garages were also debated on over whether they are truly necessary when other alternatives such as covered parking or even just parking on the street is a possibility. Can those who are struggling with high house prices really afford expansive houses and large garages considering the additional construction costs of those wants? Rather than only wants, realistically, how to I satisfy their needs (the main one being an affordable house)? With those in mind, I reconsidered my designs. 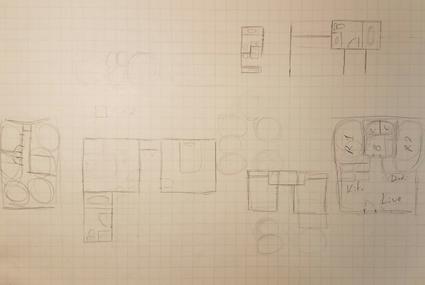 Most initial sketches of mine had mostly been incomplete and jumbled. 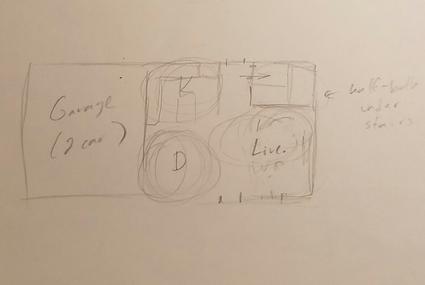 Only the first floor of a two story housing unit. 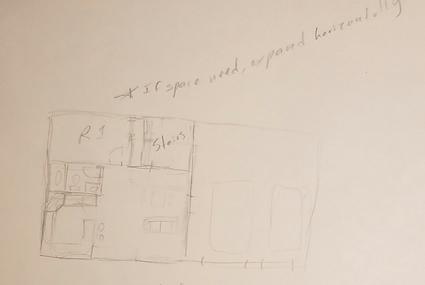 Potentially a two story housing unit, this was the first floor. 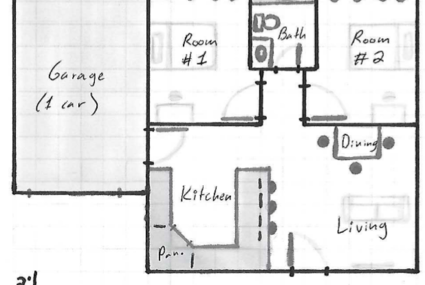 A single story 2 bedroom home with a single car garage. 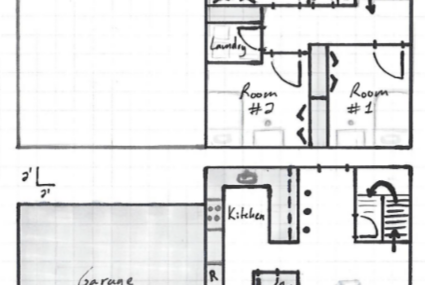 A double story 3 bedroom home with a 2 car garage. Each floor has the same sq. ft.

Within this section, issues of the floor plan were resolved as a final design for it was created. Appealing features were considered upon it's design which did include separation of the master bedroom and the other bedrooms. The house is simple in shape to cost less upon building. Its design seeks to satisfy the bare needs of those who cannot afford large, expansive housing appropriately.

Materials: -Roofing will be asphalt shingles. Depending on the brand of the asphalt shingle, the lifespan varies. Some last up to 30 years. Those will be used so excessive replacement (which can be expensive if necessary often) is unnecessary. While more expensive to buy the better shingles immediately, in the long run it is less damaging to ones budget, fitting my view of what affordability is. -Walls are to be of concrete (CMUs), as stated in brainstorming. While concrete housing can be more expensive to more elaborate designs, considering the "boxed" overall shape of my design, it becomes possible, even cheap. Additional insulation will be needed to make up for it, however; concern over the nearby noisy streets is no longer an issue due to the concrete being excellent for noise reduction. -Flooring will consist of bamboo wood floors in all rooms except for the two bathrooms. Carpet tends to be harder to care for and keep clean. By using wood, which can be cheap and appealing from the various colors of bamboo floors available, the house is easier for the client to manage, especially if that client does have a family keeping them busy (as children often keep their parents). -The curtain systems on the walls of the living and dining room will be using aluminum for mullions due to the expense of steel. -Landscaping will consist of plants suitable to the desert environment and no grass will be present. Natural rocks will be used. It is present in this housing for the sake of having self sustainability plants and using less water. This is both helpful for the environment (less careless use of fresh water) as well as it will cost the client less in water bills. 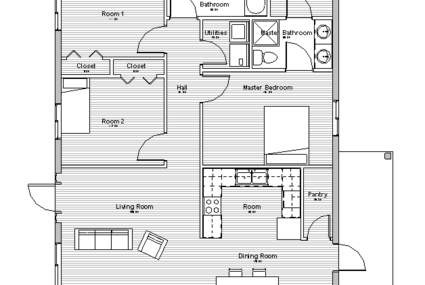 Upon designing, this seemed to be most appropriate. 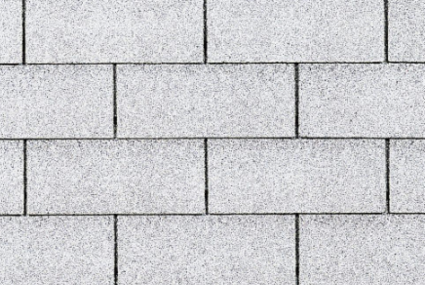 This material will be used as the roofing materials. 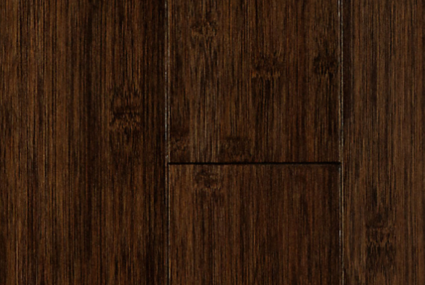 Bamboo wood flooring will be used in all rooms except for both bathrooms.

While some choices made in designing the housing may seem more expensive up front, for example, the initial budgeting for asphalt shingles with greater durability rather than other types of shingles that may be cheaper, in the long run it will be less expensive due to the lack of need for constant replacing. Orientation of the house, having majority of light coming through the windows on the north and south walls, does maximize natural lighting. Considering the houses simple shape, building is easier and concrete exterior walls become affordable. Concrete walls, while they do demand extra forms of insulation, serve the purpose of lessening noise of the busy streets nearby. This allows the client peace and the ability to be near potential work, schooling for children, and public resources while being in housing that is priced fairly. By initial budgeting into that extra insulation, the housing will be more energy efficient and will save money in the long run from bills. Desert landscaping also helps the clients by being appealing (which makes the client more content with their home from it's nice exterior appearance), by being most appropriate to this dry, hot environment, and it saves costs from water bills (a long term consideration). This house is an appropriate size, can satisfy a broad range of people due to its flexible design that can satisfy most needs, is affordable upon initial purchase due to its simplicity, and in the long run it considers that affordability as well. 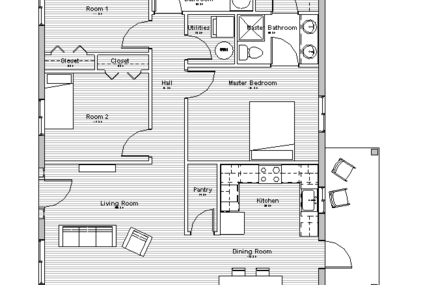 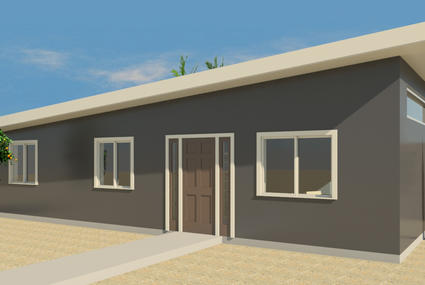 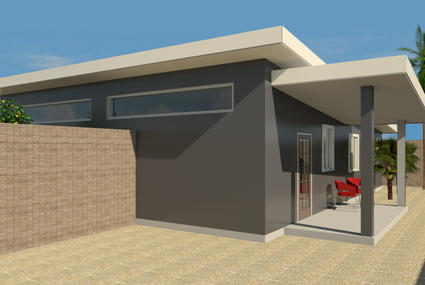 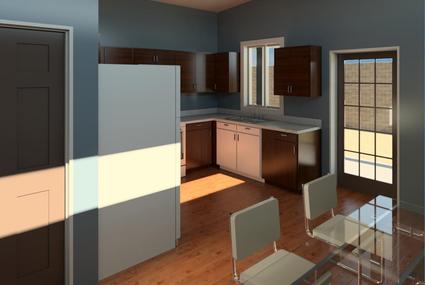 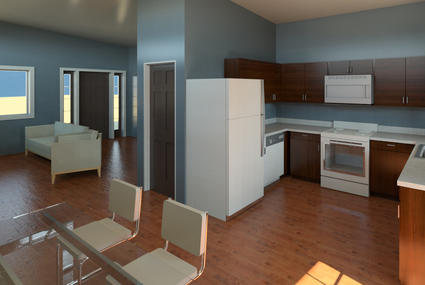 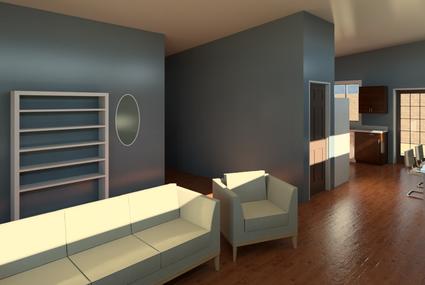 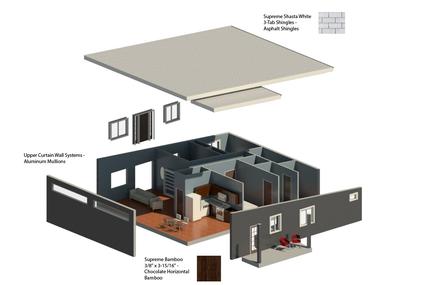