The lack of affordable housing in the United States is a crisis. The problem is that the demand for affordable housing options outweighs the supply of the units. From 2006 to 2014, the rental population in major U.S. cities - including Chicago, Los Angeles, San Francisco, and New York City - has grown more than the amount of rental units. This is a problem, because when the demand for a product is higher than the supply of the product, the price of the good is larger than it should be. The U.S. Department of Housing and Urban Development defines households that are cost burdened (paying more than thirty percent of their income on housing) are in need of affordable housing. These households spend too much of their income on housing, so they might have problems buying food, clothing and paying for medical care and transportation. If the household includes children, the costs keep on piling, because education costs are also on the rise. The government is helping, but the help is not enough. The government provides financial support for families or individuals who cannot afford a home. However, according to the Harvard Joint Center for Housing Studies, the number of households that are eligible for assistance from the government and are not receiving help is larger than those who are receiving financial assistance. The government also supports the construction of affordable housing and encourages the addition of affordable apartments in major cities, like New York City. The support is not enough to combat the demand for affordability, and sometimes, these "inexpensive" units are not affordable for low-income households, those that need the housing the most. The affordable housing crisis continues to grow and requires immediate attention from the federal level. The affordable housing prototype for the Chicago Architecture Foundation Competition needs to be affordable for, at least, a family of four living on a median household income. The prototype will not be an apartment unit as the benefits of owning a home are far superior than the benefits of living in a small, secluded apartment unit.  Home ownership adds a sense of freedom, provides stability in children’s lives, and makes sense economically. It is an investment that can be daunting for low-income families, but there are economic benefits of owning a home, such as receiving tax breaks. Tax breaks will be crucial in the affordable housing prototype. To be eligible for a tax break, the home needs to have a solar panel, geothermal heat pumps, or wind turbines, all of which are investments that pay off. The final design will hopefully raise interest in redesigning already existing “affordable” homes and will provide an idea of how a stable and sustainable shelter for a low-income family in Chicago would look like.

In this section, I picked a site, provided data about the neighborhood, and gathered information about solar panels and green roofs. 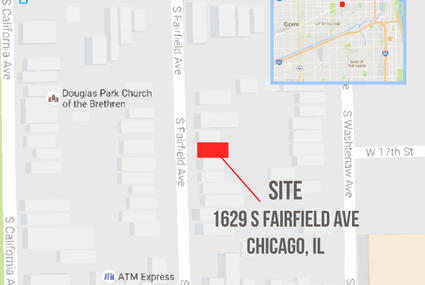 This picture shows the location of the affordable house prototype. 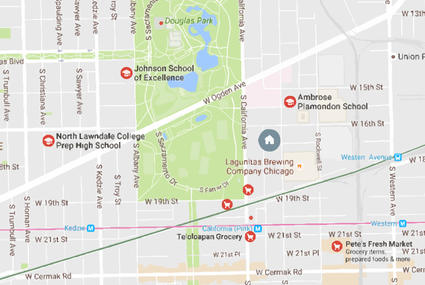 The Douglas Park neighborhood is located near a CTA train station and a bus stop. 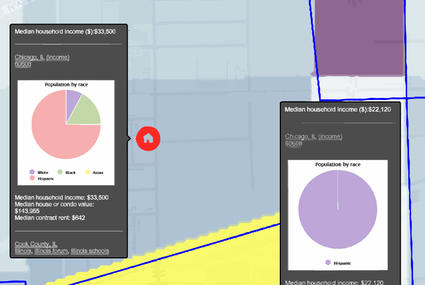 I used city-data.com to find the median household income of the Douglas Park neighborhood and a n 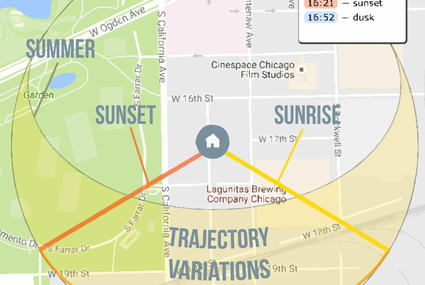 This picture shows the sun's path across the site. 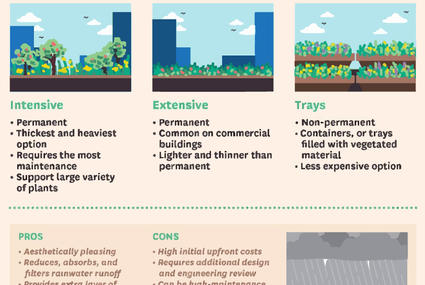 This diagram shows the benefits and drawbacks of having a green roof. 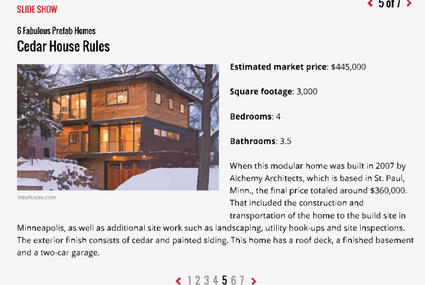 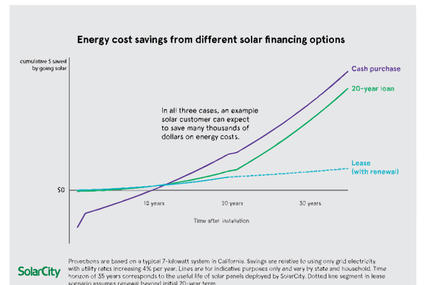 SolarCity.com provided this graph that illustrates the energy cost savings that come from loaning

After reading articles about affordable housing, about cheap building materials, and seeing the simplicity and flow of modern homes, I began sketching ideas for this project. The first few designs emphasized my desire for solar energy with the addition of a sloping roof facing the sun; however, the homes seemed black and white in every other aspect. I continued sketching until I found the one design that was eye pleasing and would easily fit in with the other homes in Douglas Park. Drawing floor plans, adding color, and making a model on Fusion 360, I elaborated on the sketch, the idea, to be sure that this was the design I wanted to begin with. The model looked great, but the dimensions were off; I forgot to measure the length and width of the lot. So, I was back to sketching and looking at tall, modern homes for inspiration. Then, I found a home that had a bold color scheme. I decided to combine the color scheme with my previous design, while changing the dimensions of the home to fit the lot. I made a new model of the design. I added windows, colors, and lights to get a sense of what the finished product will look like. Below are the sketches I drew, the projects that I used for inspiration, and the renderings of the models I made on Fusion 360. 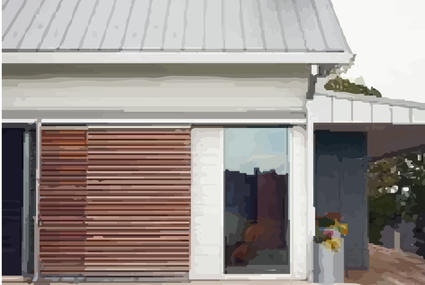 This is a picture of a white exterior home with navy blue and wooden details. 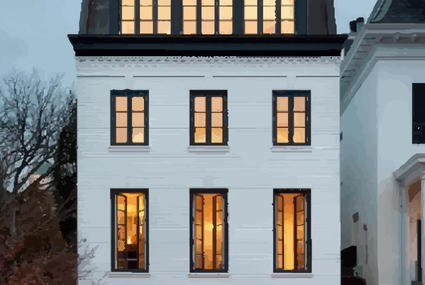 Although this home is white, it has character; the lights give the exterior of the home an orange 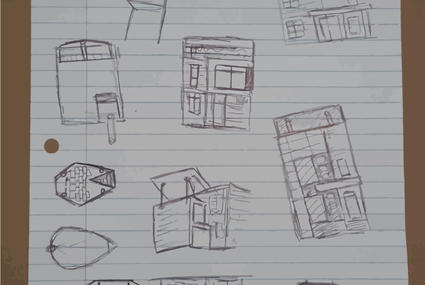 These are the first homes I drew. I used to Pinterest and Archdaily for inspiration. 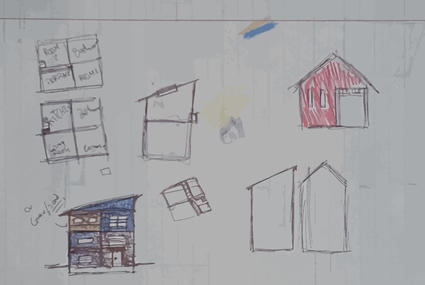 After more filled up papers, I found a design that I liked, or , at least a feature that I liked. 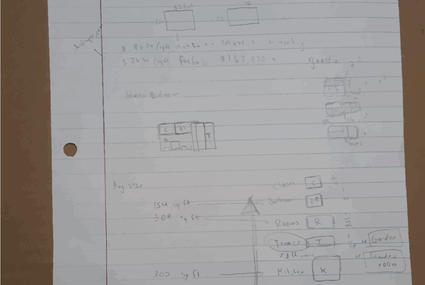 This picture shows the concept of having modular spaces in the house. 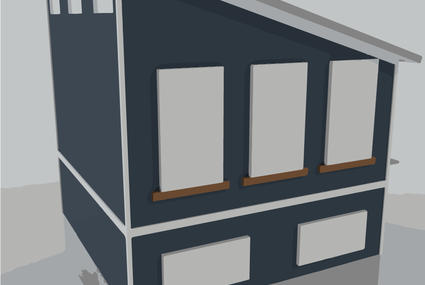 This is a picture of the first home I modeled using Fusion 360. The design was simple. 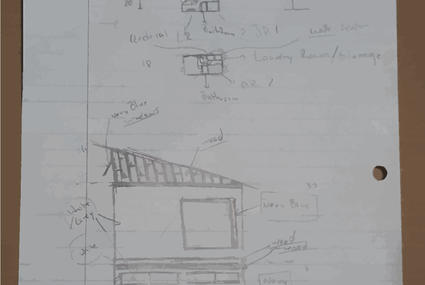 This is the sketch of the new design. 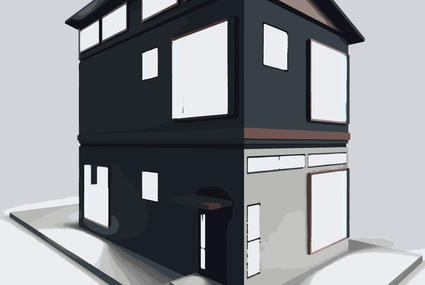 This is the new model of the home.

During this stage in the design process, I begin working on the Revit model. I begin looking at affordable materials in depth, as well as cheap ways to build a home. Here, the pictures and diagrams show my progress from converting the Fusion 360 model (from Brainstorming Ideas) into a Revit model, to changing the floor plans and overall concept of the prototype. 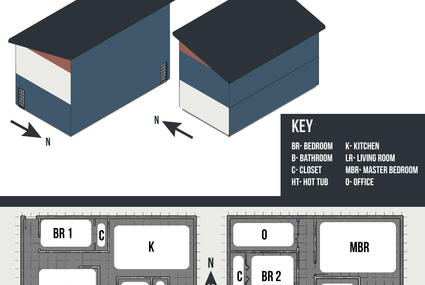 This diagram shows the top-front and top-back views of the initial home. 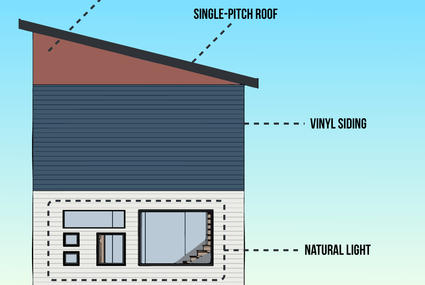 When sketching designs for the home, these were the recurring elements: abundance of windows, aff 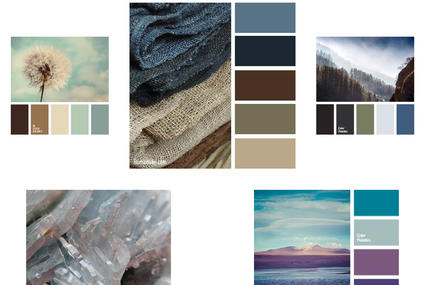 I chose a palette of colors from Pinterest during the early stages of modeling. 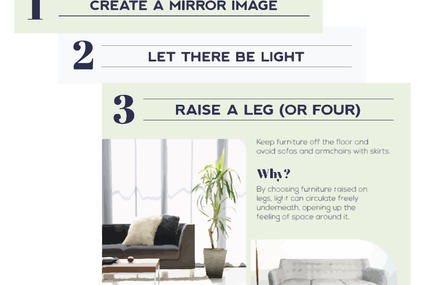 How to Create the Illusion of Space

After deciding what color scheme to use, I read an article of how to create space, how to make sm 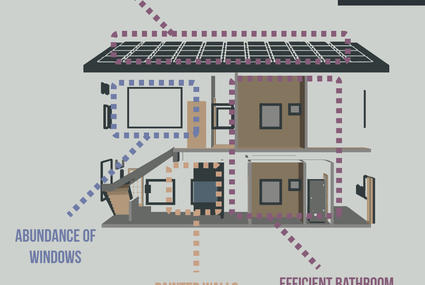 This diagram shows how I began placing the windows on the home, as well as how I implemented an e 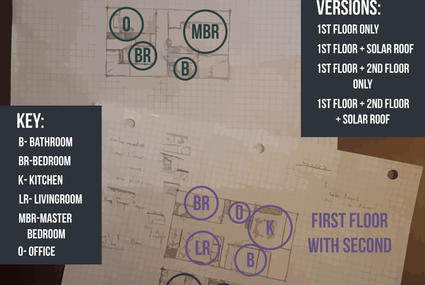 Before I drew these sketches, I read an article about the most affordable way to build a home.

The site is in Douglas Park, a mostly Hispanic neighborhood that has a median household income of $33,000 and median contract rent of $642 (city-data.com). These homeowners are not in need of affordable housing because they are paying less than 30% of their income on housing; however, there are homeowners in the adjacent neighborhood that are cost-burdened. The proposed home will attract prospective buyers from around the area and improve the housing crisis. My design will encourage renters to buy their own home. The modular, prefabricated home comes in two versions: the Single House and the Full House. Each home is affordable in the community. If the homeowner decides to buy the Single House, he or she can save up to install solar panels on the roof, or to buy the second floor, upgrading from single to full. The upgradability makes the prototype affordable for a large range of homeowners. The solar roof adds to the affordability. Homeowners do not need to buy solar panels if they cannot afford it, but solar companies can give loans or install solar panels for free. If solar panels are installed for free, the company will charge for the energy the solar panels produce; however, the cost will be cheaper than the cost of electricity produced from coal. If a family decides to buy the Single or Full House, they will be able to afford other necessities such as food and clothing. Also, the addition of solar panels positively impacts the environment. The materials, furniture, and placement of the home’s elements make the space look bigger than it is and decreases the cost of the home. Bamboo flooring from a wholesale flooring store decreases the cost of flooring by 35%. Bamboo is a great material to use because it is a sustainable resource. To create storage space for a family of four, the furniture used has ample storage space. Additionally, the beds in the smaller rooms are lofted to create space underneath the beds. Vinyl siding is used in the exterior because it is cheap and because most homes around the site feature this material as well (the home should fit into the community). Mirrors were added across windows to create the illusion of space.  Also, the wall color in the main area, not bathrooms or bedrooms, is light, which makes the space look bigger. The kitchen is not big, but it has all the essential components and plenty of cabinets. By eliminating the bulk and keeping the essentials, the prototype becomes simple and affordable. Additionally, the home will be made in a factory and installed at the site. Prefabricated homes are cheaper than conventional homes because the construction time is smaller for prefab houses than for stick-built houses. The walls of the house follow a two foot grid, so construction costs will decrease because construction materials come in even lengths. Finally, to efficiently harness the sun’s energy, the roof slopes towards the sun so that all solar panels produce electricity. 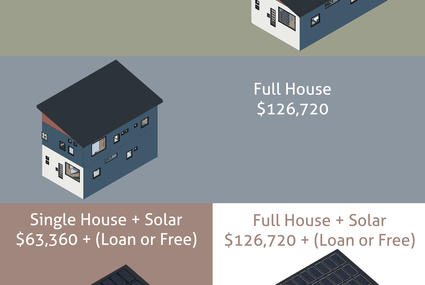 This diagram shows the two versions of the affordable home. 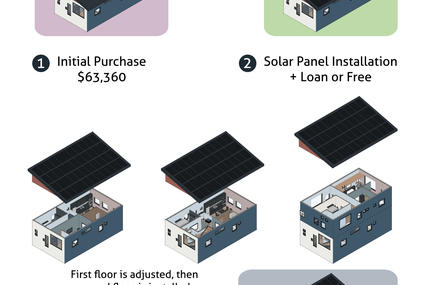 The affordable home can be upgraded. 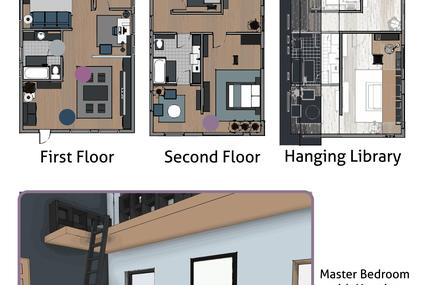 The first floor of the Full House consists of one bathroom, bedroom, a kitchen, office, living ro 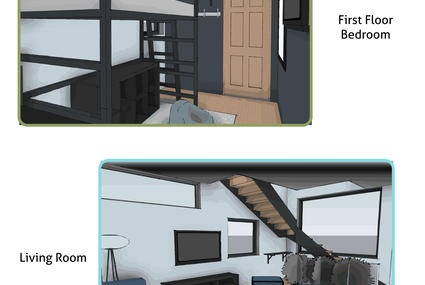 Beds are lofted to create space underneath. 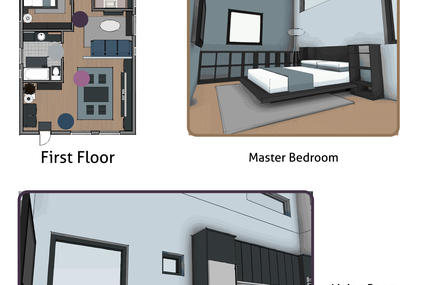 The first floor of Single House is almost identical to the Full House's first floor. 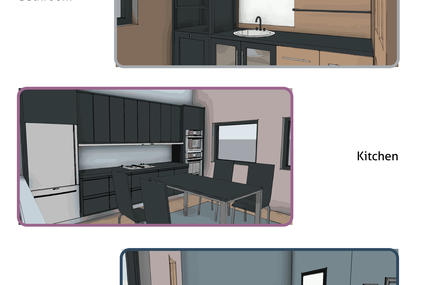 These are views of the spaces that stay the same for both houses. 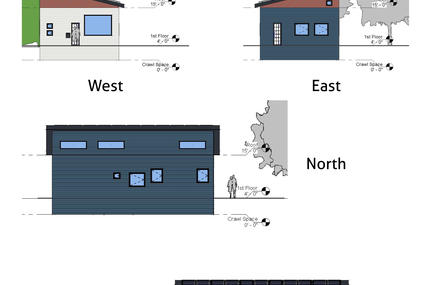 These are the elevations of the Single House. 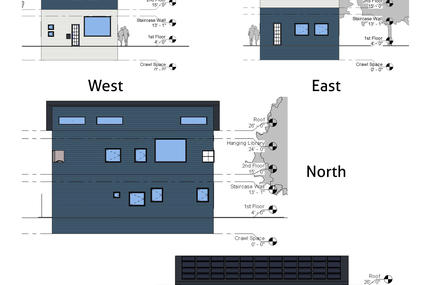 These are the elevations of the Full House.