I belive a high transit/low amount of stops bus shelter should have more facilities than your standard bus shelter because you have more resources to use (there being less stops and by extension less money spent on them) and more than likely more bus fare (Higher transit and ease). I think for a bus shelter to hold 25+ people, have a point of pay facility, keep out the elements, and have fast bus loading, it needs to be an enclosed structure.

My basic design or idea is similar to a airports waiting terminal. An enclosed space with facilities that allow you to wait comfortable, view bus schedules/routes/fare, keep out the weather, and overall provide a accessible and public space for waiting or a bus. It must however not be too expensive as it is only a single bus shelter and there will be many of them. It can be as simple as taking an already large BRT bus shelter and having the walls of glass extending to the ground from the edge of the overhand to keep out the weather/flooding. No expensive air conditioning is needed but bigger and more used station might use a cheap but effective heater during the colder months.

There would be a few kiosks, im guessing around 5 of them, for people to pay for a bus ticket, and for that ticket to be redeemed upon the bus's arrival. The shelter/station would sit on a raised platform not just to help reduce chances of flooding, but also to allow disabled/elderly to more easily enter/leave the bus without having to climb stair or being lifted in a wheelchair. All estimated waiting times, but routes, etc would be displayed on monitors similar to that in an airport terminal

While compared to a standard bus shelter this would be WAY more expesive, however a low amount of these facilities scattered evenly across the edge of a city would allow the buses to easily access the highway for quicker and smoother transit (To avoid any traffic snarls in the city center), and allow for a smaller amount of these bigger facilities to be created. In the case of such stops being needed in the city center or between these bigger stops, standard BRT bus stops currently would be suffice (Consisting of a simple overhang, seats, and displays. Though certainly not enough for 25+ people).

The scale of the building would be easily modifiable seeing as all it takes to make the structure (Excluding kiosks and more seating area) is a few walls of glass (Possibly strengthened or replaced with a solid plastic screen). By having two such normal BRT shelters placed in close proximity it is possible to convert them into one big shelter by connecting the top overhangs and adding those glass walls.

Another idea i would consider is having a certain type of bus for faster drop offs/pickups. Instead of a single door where traffic is limited, it would be like a subway train with one or multiple sliding doors. Passengers would be let off first, and then different sections of people waiting (groups being kept together by being assigned to the same group/seating upon selecting the appropriate options while buying a ticket) would be dismissed to boarding. This process is similar to how boarding an airplane works, with the exception of it being quicker due to more points of exit/entry.

People would wait for the bus is comfortable but not expensive seats/benches, just like at airports. A lot of ideas come from airport terminals because of their efficiency and overal comfort.

With only slight modifications in weather protection, seating/boarding, and displays, your standard BRT bus shelter could house much more people and become vastly more efficient and accommodative.

BRT shelters i have found work and look remarkably similar to your standard bus stop, only being able to accomodate, on average, more people and with more displays. To be able to accomodate more people (25+ persons) the shelter would have to be significantly larger. Ive also found that most BRT shelters now dont have any protection against gusts of wind or any strong weather at all. I myself have found the experience of waiting at a bus stop with an overhang, just to be hit in the face with rain anyway, to be unpleasant. 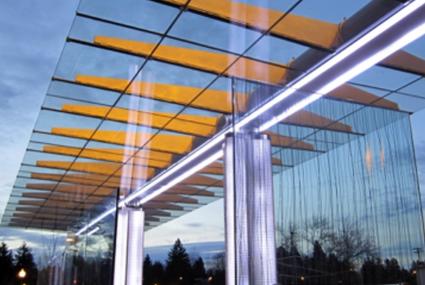 This modern and common type of bus shelter may have protection from light precipitation, but lack

I summarized my priorities in designed a modern BRT bus shelter: -Fully enclosed and resistant to strong weather -Efficient and not to costly. Easy to modify -Elderly/disabled accessible -Fast loading/unloading -Easy to use displays for quick payment and bus schedules/routes -Comfortable seating/waiting area 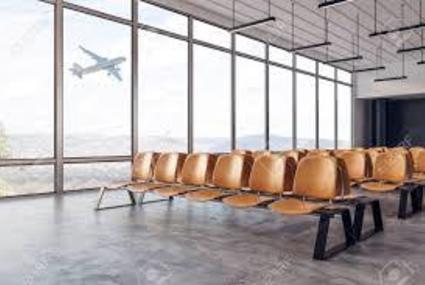 The main issues I see with my idea is the comforts promised but a lack of insulation/heating, and a general aversion to something that looks costly/expensive and being numerous. Nobody wants to sit in an enclosed bus shelter but still be freezing, and a city doesnt want a lot of upgradesd bus shelters when the cheaper ones were still good enough

To the first issue i would probably install a heater for use in the colder months and a glass/plastic screen for the walls that have good insulating ability. While this may turn out to be expensive the experience of the people waiting would be vastly improved.

To the second issue i would prioritize and emphasize the MODIFICATION of previously existing shelters, rather than the building of entirely new ones. While seeing multiple of what seems to be highly upgraded (and therefore more expensive) bus shelters around a city might make one worry about where the cities funding is going, that wouldnt be the fully story. These new shelters wouldn't cost the same as....the entire upgraded shelter. They would only cost as much as the upgrades themselves and as I said before, these modifications would be as simple and cheap as can be allowed 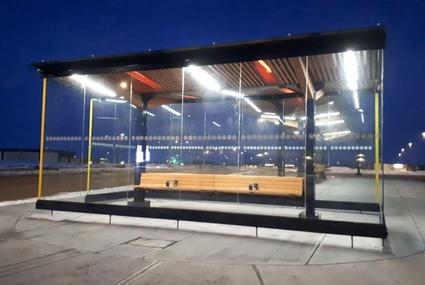 This image shows an example of how to heat a bus shelter with overhead lamps.

While my design hasnt changed much since my original idea my thoughts on the price, the service life, and the actual creation of these new stations has been made more clear. Its less of a new idea and more of an upgrade that prioritizes comfort and faster transportation overall.

-Modified BRT bus shelter than includes insulative and strong transparent walls that are easy to move/modify -A heater for the colder months -Digital displays for not just paying for tickets, but also to provide information that may result in less percieved waiting time and thus improve a waiting person comfort -Public and open to all people -Cheap and efficient due to it being a modification of an already existing shelter -Waterproof ceiling and sides -Comfortable waiting area along with efficient loading/offloading 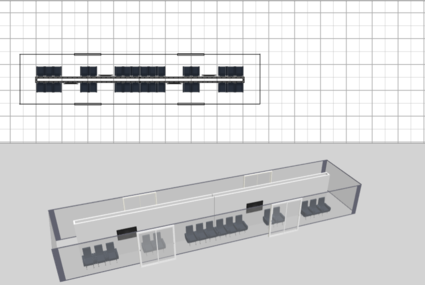 Honestly I got way too engrossed into making this.