Public libraries exist in many countries across the world and are often considered an essential part of having an educated and literate population. They are distinct from research libraries, school libraries, and other special libraries in that their mandate is to serve the general public’s information needs. It also provides free service to encourage early literacy, quiet study, and work areas while giving available resources. As the Chicago Public Library’s goal is to encourage community interaction, a way to innovate design the designated space is by creating open spaces within the building while serving different functions in order for young adults and students to easily work in a welcoming environment. In order to create a natural meeting space for education and research, the building must be designed for the purpose of implementing environmentally sound practices that will support a sustainable, healthy, and optimistic atmosphere.

The site is located on an empty parking lot at the northwest corner of West Taylor Street and South Ada Street, Chicago, 75’ (east/west) along West Taylor Street, 125’ (north/south) along South Ada Street. 75’ X 125’ is equivalent to three typical Chicago residential lots with a sum of 9,375 total square feet. While there are several Italian-American communities that thrive within the Chicago metropolitan area, Taylor Street, the port-of-call for Chicago's Italian American immigrants, inherited the title of Chicago's "Little Italy." Taylor Street's Little Italy is part of a larger community area — Chicago's Near West Side. In historical context, the area was dominant among the immigrant communities that comprised the Near West Side during the mass migration of Europeans around the start of the 20th century, were Italians, Greeks and Jews. Other ethnic groups vacated the neighborhood beginning in the early 1900s, and only the Italian-American enclave remained as a vibrant community. Taylor Street has popularly been known as Chicago's "Little Italy," but several other areas in Chicago have had significant Italian populations. Inner-city enclaves along Taylor Street, Roseland on the Southwest Side and Little Sicily on the Near North Side, as well as enclaves beyond the city limits, such as those in Highwood and Melrose Park, all flourished. The neighborhood used to be larger, but like many of the other areas of the city affected by the construction of expressways, it lost a considerable chunk of land when the Eisenhower Expressway was built in the 1950s. It lost even more real estate when the University of Illinois-Chicago moved into the area in the 1960s, but the predominantly Italian character of the neighborhood remained strong. The climate is continental, with frequently changing weather bringing temperatures that range from relatively warm in the summer to relatively cold in the winter. Temperatures of 96 degrees or higher occur during summers; winters can register a minimum low of minus 15 degrees. The median resident age is 34.2 years, and the population is 1,320,904 (48.5%) males and 1,401,485 (51.5%) females. The average number of persons per household is 2.5 with a total of 1,053,229 number of households. The median household income is approximately $50,702 in 2015. 29% live in a single unit type of housing, with the remaining 71% living in a multi-unit housing. All housing units are roughly around $321,158.

In this section, I picked a site, provided demographic data about the neighborhood, and gathered information about the cultural community and natural landscape.

This website gives the latest estimate for the population of Chicago from the US Census Bureau. 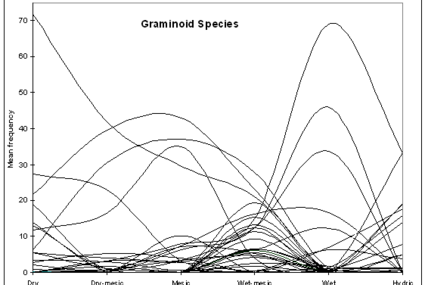 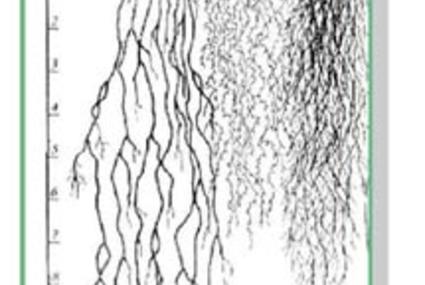 This website explains the natural landscape and the use of native vegetation, particularly prairi 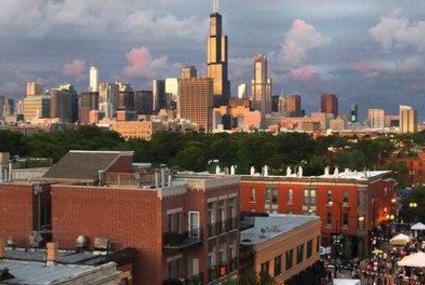 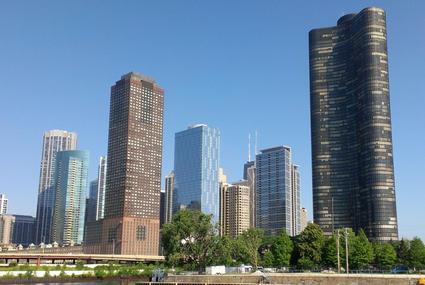 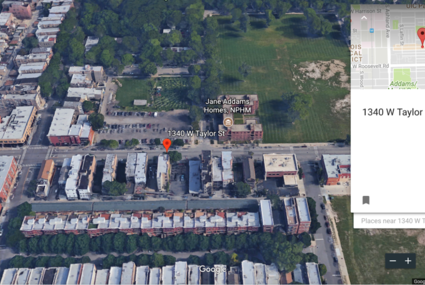 This photo shows the location of the proposed public library. 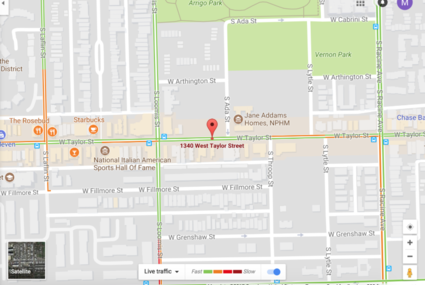 This shows an estimation of traffic flow in the area of the proposed building.

I focused my ideas on the components that make up a successful proposal. My objectives were concluded to create a natural meeting space for education and research and to value accessibility, transparency, leisure, and interaction. Keeping the design structure very minimal, I kept concentration on 4 general concepts that will provide a stronger foundation to propose a solution.

My initial thought of style was inspired by the movement of Postmodernism that has paved way into parts of Chicago and has continued to show cultural change throughout the past decades.

Postmodernism It is an amalgamation of many styles borrowed from history reacted to urban context embracing decorative traditions. Postmodernist ideas could be found in a wide variety of creative fields that dissolved the boundaries between them, including: literature, visual arts, graphic arts, industrial design, theater, and dance.

I came to the suggestion that my design should be kept minimal and available for creativity to blossom from the people of the community. 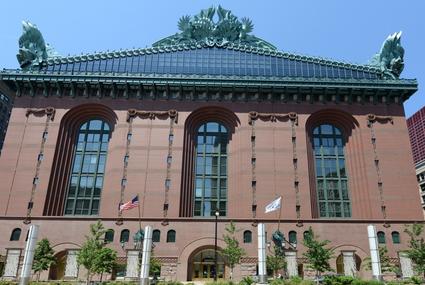 This article informs about energy efficiency for fact-finding missions around the world. 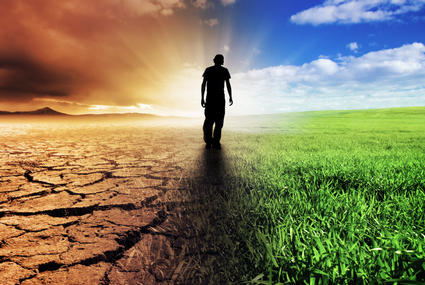 This article informs about the definition of sustainability in the environment, society, business 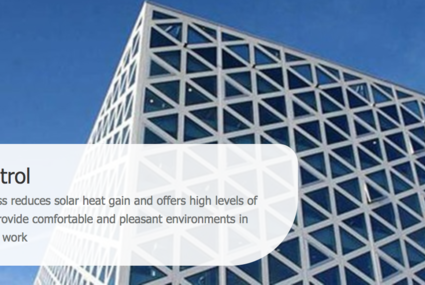 Based on the general observations made about the purpose of this project, I based my ideas on 3 different concepts to contribute to the final product.

Design Concept #1 Historic Revival: This design’s solution is primary to the public library’s open space. From the Postmodern phenomenon, styles of emerging elements from different eras are incorporated to create a purpose for energy efficiency and cultural expression within the Little Italy community. Inspiration was taken by this emerging movement already paving way through the cultural shifts in Chicago.

Design Concept #2 Vivid Attraction: This design’s solution is primary to unify spacing for strong interaction with the occupants of the building. By uses of attractive lighting, solar panels, and cultural expression, this building is built for the purpose of a welcoming atmosphere that is active and alive within the community.

Design Concept #3 Sustainable Renewal: This design’s solution is primary to highlight modern sustainability. This design centralizes the idea of material selection and it’s importance to the effect on the environment around it. It is kept to a simplistic and general appeal, emphasizing spacing and environmental impact.

By the end of my first drafts, I took consideration of different elements from each design concept to come up with a solution that will achieve as much pavement into establishing a stronger community. 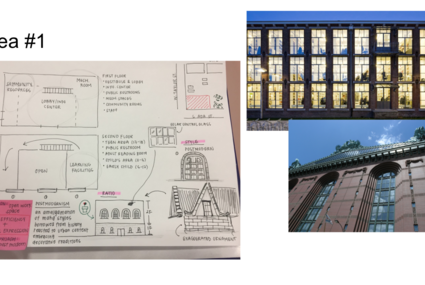 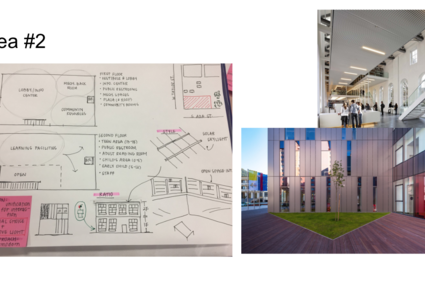 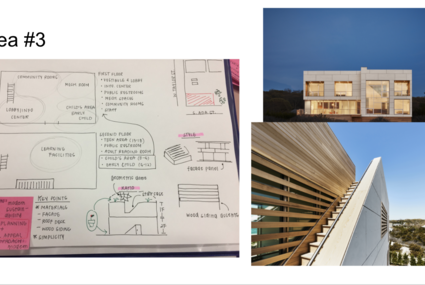 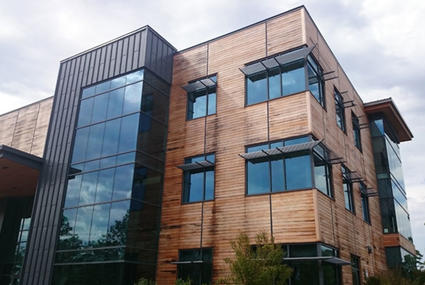 This article follows the idea of using solar control glass to save energy. 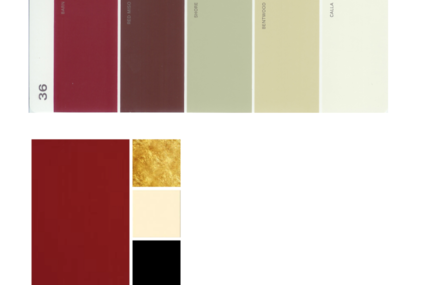 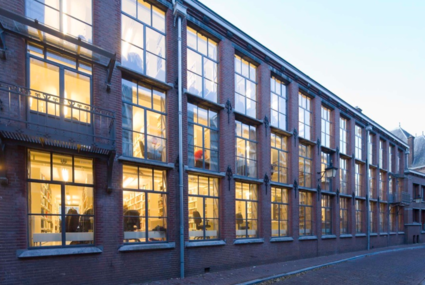 The CLI Library facilitates a natural meeting space for education and research. I designed a two story public library that embodies the clean and simple community of Little Italy. Space planning in this design was kept minimal, paralleling rooms with appropriate location for easy access. I based my design on three material selections that I believe was the most applicable in proposing a solution to this problem: brick, siding, and solar control curtain systems. Brick will efficiently support the building's heat system and absorb humidity that cannot escape through climate shielding. The universal and popular use of brick in the city also brings the attraction of Chicago's cultural ambience, embracing traditions and the Little Italy community. The affordable value and strong versatility of vinyl siding is effective to withstand strong winds and to conserve heat. The use of curtain wall from solar control glass is a new product developed to help protect and preserve environmental factors. These material selections were formed to emphasize the importance of the site surrounding and the efforts of manifesting cultural expression in this area of Chicago.

Highlighted areas to be aware of in this design are the Reading Areas and the Indoor Garden. My room relations were centered from the idea of an Indoor Garden on the ground floor. It brings attractive lighting, unifying space for strong interaction with the occupants of the building. The use of indoor gardening improves the air quality in which plants can absorb higher humidity levels and cleaner air. This allows more preservative sustainability that brings an element of liveliness into the neighborhood. The first floor consists of resources that everyone will have easy access to dependent on their level of availability and time spent in this library. Those who wish to engage in a longer time of obtaining resources will find their way to the second floor that has all reading facilities to keep a constant flow of organizing open space and relation. The building structure, space planning, and visual design is valued from the Little Italy impression of leisure in culture and interaction.

My final design focused on the 4 general concepts developed: Energy Efficiency, Environmental Sustainability, Solar Control, and Cultural Expression. This building is designed for the purpose of optimizing new technologies and urban infrastructure with environmentally sound practices that will support a sustainable, healthy, and optimistic population. In the design element of the library, different textures of exterior materials, such as brick, curtain wall, and siding, streamline importance of material choice and cultural expression. From the use of materials, centralizing the idea of solar control and designing an environment with the lasting impression of the Little Italy community, this design will bring flexibility and awareness to a historic restoration. 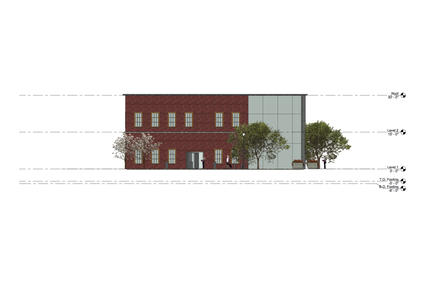 This is a view from which the front of the building is on W Taylor Street, facing towards the mai 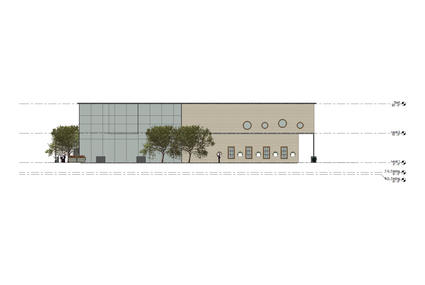 This view is facing the direction of S Ada Street. 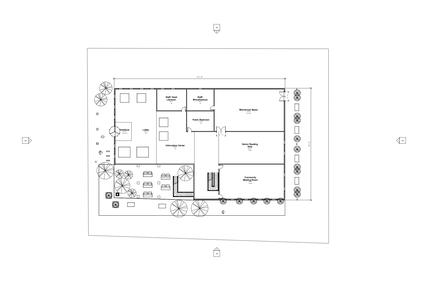 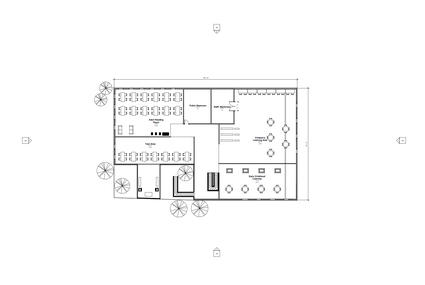 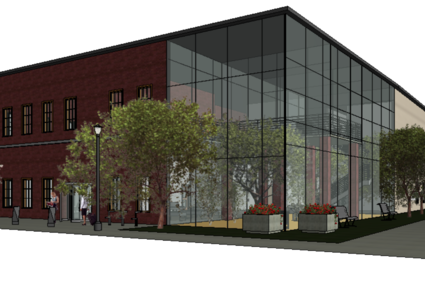 This is a 3D perspective of the front of the library on W Taylor Street. 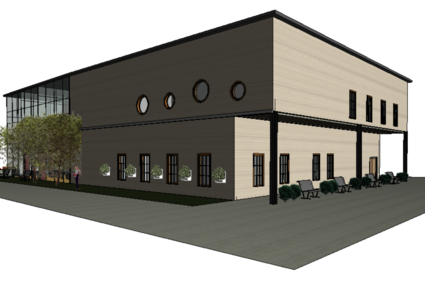 This is a 3D perspective of the public library on S Ada Street. 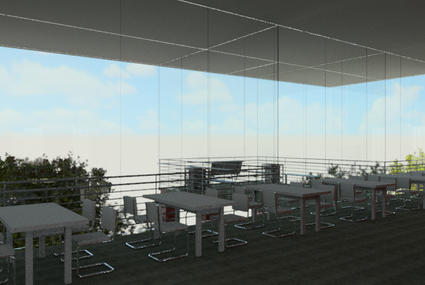 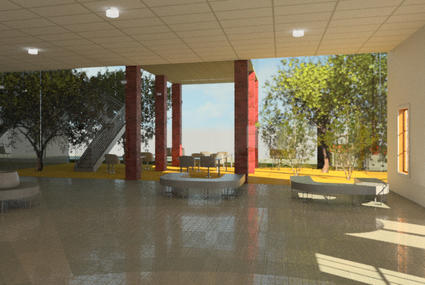 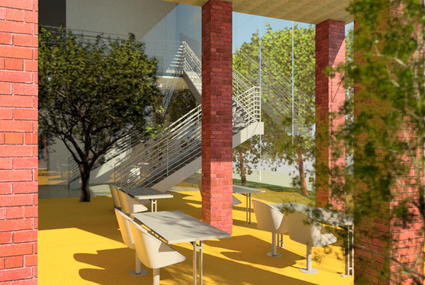 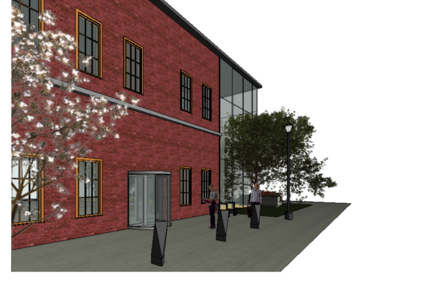 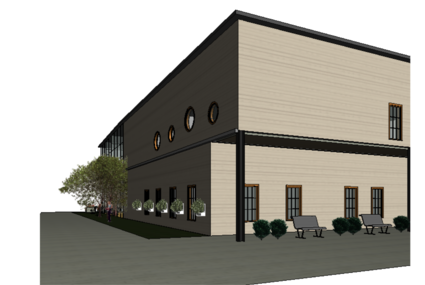 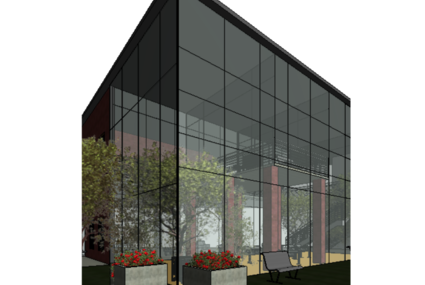 The use of solar control allows the improvement to reduce carbon emissions and help the U.S.