Little Italy, also known as University Village, is one of the many small communities within Chicago. Chicago is a city known for it's rich history and innovative nature. As America's third largest city, Chicago is one of the most diverse settings in the country. Little Italy was once an Italian enclave, but it now more commonly referred to as University Village because of its proximity to the University of Illinois in Chicago. The area currently lacks a community center and a library. The object of this design is to provide a place for everyone, no matter the age, can go study, converse, read and learn. The library will be located in the middle of Little Italy and will be easy to reach for all visitors, even if they don't have their own transportation.

Little Italy is historically known for being an Italian enclave. The neighborhood has since become more diverse and is now home to a variety of different people. The Italian influence, however, can still be seen in the small businesses lining Taylor Street. Today, the neighborhood's age structure is primarily shaped by the University of Illinois at Chicago, giving the area the name University Village. About half of the residents in the area are young adults between the ages of 19 and 30. Of the approximated 6000 people living in the area, 53% are women and 47% are men. Only about 20% of households in the area have children, which could be due to the fact that the rent in Little Italy is on average $1,135, almost $300 more than the average rent in Chicago. Considering the area is near a university and has higher rent than surrounding areas, it's not a surprise education levels in Little Italy are higher than Chicago's average. 70% of the residents in University Village have 1 or more years of college, and of this 70%, 85% have earned higher than a bachelors degree.

Since many of the people living in University village are themselves still college students, they don't own any vehicles. The average number of vehicles per household in the neighborhood is lower than the Chicago average. Luckily, CTA offers a number of bus routes in the area. There is a route running east-west along Taylor Street and north-south routes on Ashland Ave. (Little Italy's western boundary), Racine Ave. (running down the middle) and Halsted St. (eastern boundary). The site will be accessible to everyone whether it's by a personal vehicle or public transportation.

Being historically Italian, Little Italy has many Roman Catholic Churches. The churches were designed during the gothic revival movement on the 19th century, the same time Italian immigrants began settling in the neighborhood. Neo-gothic architecture includes elements like arches and gable roofs.

Also found in the area are some of Jane Addams's Hull Houses. The purpose of hull houses was to offer opportunities to European immigrants. One could say they were like community centers for the poor, funded by Jane Addams's inheritance. The typical hull house was made of red brick and had decorative cornices lining the facade.

The typical building in Little Italy, however, is a multi-family apartment building. On Taylor Street, most buildings' main levels were a small family owned business with the upper levels being homes. These buildings were almost always decorated with red brick, had cornices lining the top, and had a flat roof. 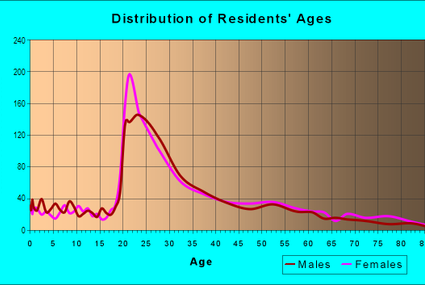 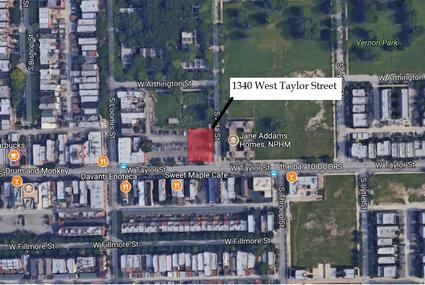 This is approximately the site the new library will be located in.

This is an overview of what the neighborhood has to offer, including historic churches and hull h

For my building design, I want to showcase historical elements but also incorporate more modern elements to represent the innovative attitude Chicago has. Since some architectural features are old fashioned and impractical, I decided to place the emphasis on history on the exterior of the building where it can be praised without causing inconveniences. The inside will be more modern so it can be more functional for today's needs. Looking at many of Chicago's most noteworthy buildings, I noticed that they all have a historically representative facade or base with a more modern interior or top, respectively. In order to have the building appear more visually interesting I decided to follow this pattern and cut off a round wedge from my rectangular footprint. The simple fact that this wall will be curved will differentiate the building from surrounding edifices.

Since urban areas typically lack green spaces, I plan to implement green in as many areas as possible. A green roof would be appropriate given I'm planning on having a flat roof, but I want people on ground level to actually see it. My idea for the use of plants is to arrange them in an aesthetically pleasing manner. I thought a green roof would look cool if it were sloped so I decided I'd add a sloped path that could be used as a planter on the curved side of the building. I then got my idea of making this area a ramp as well to make the library more accesible for people who cannot use stairs. 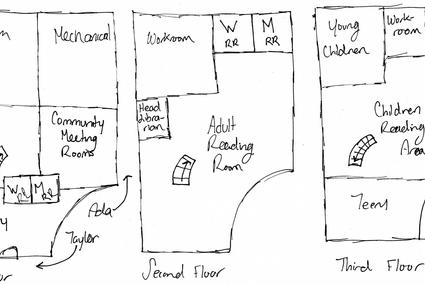 These are the first ideas I had for my library. 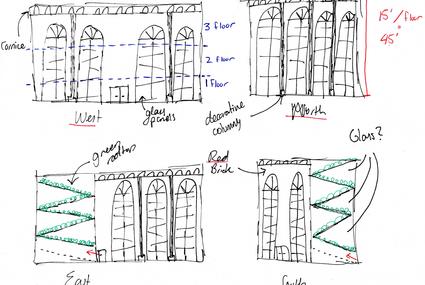 This is what I originally envisioned my library looking like. 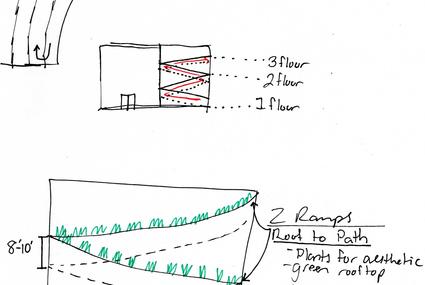 My ramp idea makes all levels of the library accessible for anyone who can't take stairs.

This link shows the most popular buildings in Chicago.

I decided to make most of my interior walls curved. If the building would have been a perfect rectangle, straight walls would have been optimal, but to accommodate for the round dip in the southeast corner, I chose to make some of the walls parallel to add flow to the building. Entrances to the library are located on Taylor Street (main entrance), Ada Street (entrance to the ramp) and the west side for access to the parking lot. On the first floor, near the lobby, I added a small staircase to go up to a half level where the ramp could be accessible. This half level results in low ceiling heights for the vestibule in the main entrance, so when you walk into the lobby, the space opens up, giving the illusion of a larger space. For the community meeting room, I decided to split the space into two areas with distinct purposes. One room (Community meeting room 1) has tables and is meant for small groups to meet or a small banquet to be held. Community meeting room 2 can be used as an auditorium or lecture hall depending on its users.

The entire second level is meant for adult use. Since the majority of inhabitants in Little Italy are college students or middle age professionals, I decided to maximize the space they could use by giving them an entire floor.

The third floor has both children areas and the teen area. The young children learning center is seperated from the childrens area with a glass panels to control noise levels in the larger children reading room. The teen area is elevated to seperate it from the children area. It has a wall with arch openings to seperate it further, giving the teen area a cozier feel to it. I thought teenagers would not want to be in the same area as small children so the seperation would give them their own enclosed area.

My plans for the exterior of the building are red brick and arched windows. The red brick would be reminiscent of chicago's traditional style and the arched windows would be tribute to the churches found in the area. 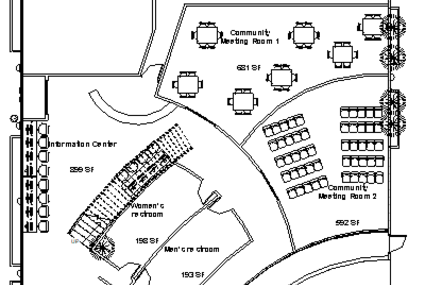 This is the floor plan I developed for my first floor. 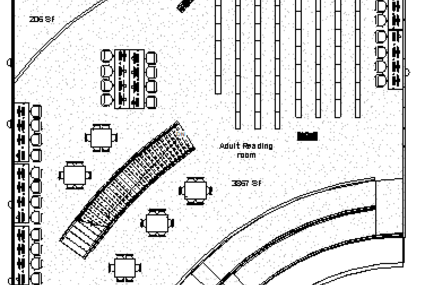 This is the floor plan I made for the second floor. 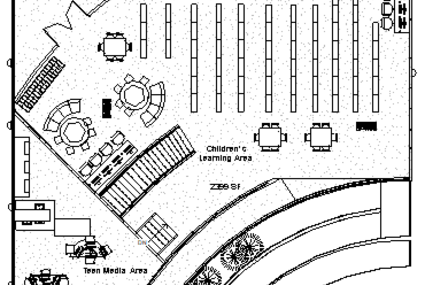 This is the floor plan to my third floor. 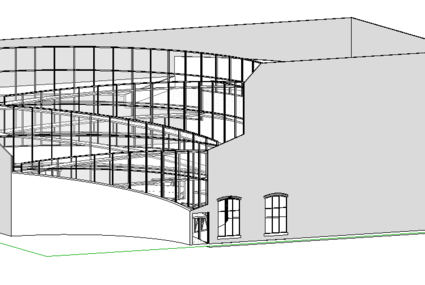 This is the exterior of my building viewed from a southeast perspective.

My final design can be seen in the renderings below. The name of my building became "University Village Community Learning Center". Although the area was previously Little Italy, I thought University Village would be more appropriate because it describes the community today. Instead of naming it a public library, I decided on "Learning Center" because the building serves many functions in the community, serving as a community meeting space, information center, leisure area and of course, a library.

My floors remained the same, but I added furnishings to show the use of space in the area. The information center acts as a computer lab as well as a front desk for general questions. In the second floor, I added bookcases, computers for research purposes and tables for small study groups or reading spaces. In the third level, I decided to add different types of furniture to encourage kids to grab a book and read. Many young children consider libraries a boring place so I added different types of seating arrangements in the area in order to attract kids.

For my facade, I decided to add large arched panels to create the illusion that they were one large window. The purpose of these large glass panels was to allow plenty of sunlight into the building and minimize electrical costs. However, too much direct sunlight could damage books, let in too much heat or be a nuisance to a reader, so I looked for shading options and found motorized window shades to be both effective and attractive. These shades can be programmed to open and close at certain times of day when sunlight hits directly. The shades would be used on the east side, facing Ada, up until noon since the sun will be in that area at that time. At noon, the curved curtain walls in the ramp will allow sunlight to seep in at indirect angles. In the afternoon, as the sun follows its path to the west, the shades on the west side of the building will begin lowering. Since they are motorized, they can be lowered in small increments, according to the time of day and can do it simultaneously. The large glass windows will contribute to both the historic and the modern look. From the exterior, the panels appear to be one large arched window, like the arches in a traditional cathedral. From the inside, the panels will appear to be normal curtain walls and seem modern.

I also decided to add a cornice along the top of the building. The cornice serves to outline the building and give it a grander look. I got the cornice idea from the picture of the hull house I attached above. I thought it'd add a historical touch to the building and give it a classic elegance. I also added columns along the sides of the faced which go up to the cornice. The columns were inspired by some of the local architecture which has pillars as support structures.

I incorporated plants into my building by adding a small plaza space on ground level where people could sit on benches or leave their bikes. I researched trees native to Chicago and found that green ash trees would be a nice addition to the plaza. On the ramp green roof, I decided to use smaller shrubs to minimize weight. In the first floor, above the restrooms, was an open space, so I decided to make it an elevated garden area people could admire as they made their way up the stairs adjacent to it. The blue star juniper was the perfect plant for these two areas. For one, it's low maintenance, so gardeners won't have to be going up to give them maintenance often. They are odorless so they won't give off any odors inside the first floor. This species is also very slow to grow, so it won't start "spilling" anywhere. 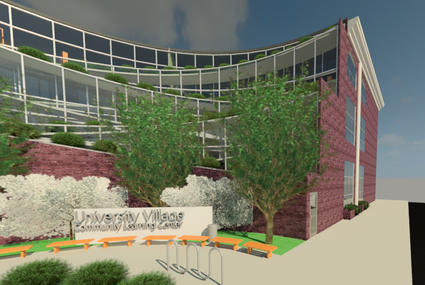 This is the eye level image of the southwest "corner" of my building. 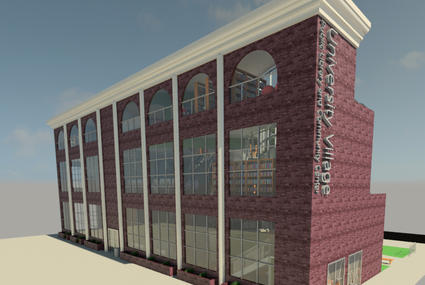 This is a rendering of my final facade design. 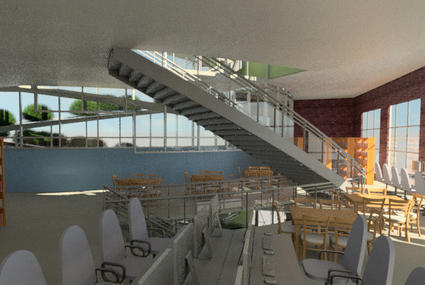 This is a rendering of the reading room in my second level. 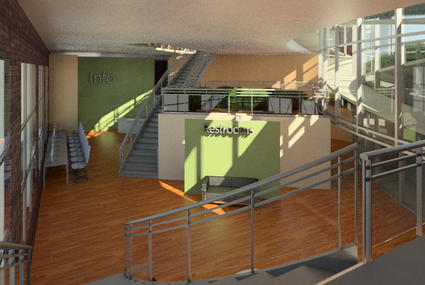 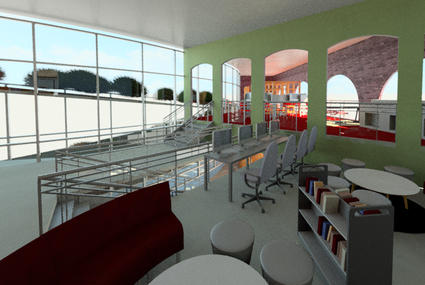 This is the view from the children's reading area into the teen area. 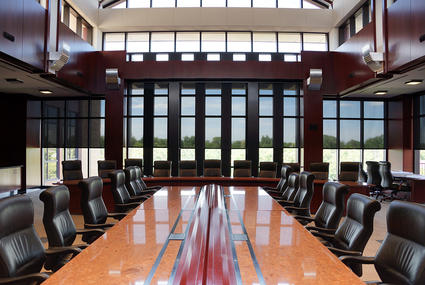 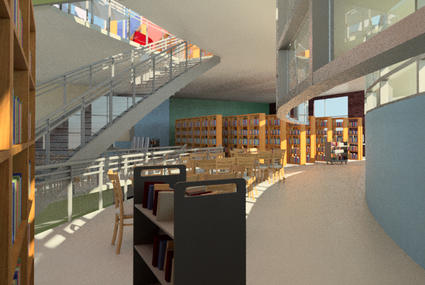 This is a render in the adult reading room.