A pocket park is a small outdoor space, usually only a few house lots in size or smaller, most often located in an urban area surrounded by commercial buildings or houses on small lots with few places for people to gather, relax, or to enjoy the outdoors. They are also called vest pocket parks, a term first used in the 1960’s. Pocket parks are urban open spaces on a small-scale and provide a safe and inviting environment for surrounding community members. They also meet a variety of needs and functions, including: small event space, play areas for children, spaces for relaxing or meeting friends, taking lunch breaks, etc. Successful “pocket parks” have four key qualities: they are accessible; allow people to engage in activities; are comfortable spaces and have a good image; and finally, are sociable places: one where people meet each other and take people to when they come to visit. While at the same time urban sprawl is destroying community involvement and social gatherings. Urban sprawl it a term used to describe the migration of a population from populated towns and cities to low density residential development over more and more rural land. The end result is the spreading of a city and its suburbs over more and more rural land. In other words, urban sprawl is defined as low density residential and commercial development on undeveloped land. Although this has always been since the world have began urban sprawl encourages people to become less social and more detached from their community. Since they live so far from their works and other amenities, the have less time to get involved with their community. Also with homes being developed further from established ares of town/ downtown area people have to drive further and more often to get to work which increase pollution. A landscape architect spoke at a TED talk once and explained an interesting phenomenon. One would expect the most pollution to concerted in the downtown areas but a study has shown that most of the pollution caused in cities is actually on the outskirts of the city. A creative way to get people more involved in their community and bring interest back to downtown is to create a variety of pocket parks which house urban farms. Urban farms or agriculture is the practice of cultivating, processing, and distributing food in a small community. A study was conducted in Detroit, Michigan in which the Detroit Recreation Department created and helped manage urban farms in vacant city lots around Detroit. The Urban Agriculture program helped reduce urban blight, provided educational opportunities, and improving access to fresh produce thus in turn creating happier community members.

In my proposed pocket park I will create a community gathering place in which community members can interact and take pride in their surrounding community. There will be an area for the members of the community to not only grow fresh produce but also sell/barter produce to the surrounding community and to the people because of urban sprawl work downtown but live on the outskirts of town. Also, there will be an area for the community to hold community gathering or block parties where their kids can play and interact with other kids and/or inspiring musicians or poets play/recite their work to the public. I want to create a safe environment where people plagued by urban sprawl can realize the beauty of the downtown area and the need to be involved with their surrounding community. Promoting interaction will result in happier people which results in a healthier city.

While selecting a site or more importantly collecting information about the Las Vegas downtown area, I felt it extremely important to not only to choose a site that will benefit the surrounding community (which is the most important factor) but also to creatively solve the current epidemic of Urban Sprawl. Urban Sprawl not only crushes the evolution of downtown communities but also leads to an increase in pollution. The site I selected meets many of the critique i was looking for in a site. For one it is located on the edge of the Las Vegas downtown area in a community plagued by poverty. Secondly, there is rundown bike path that runs along the proposed pocket park and the interstate. Lastly, the proposed site is located right next to the interstate which naturally creates not only green house gases but also noise pollution. The proposed pocket park will help combat pollution both air and noise, persevere native plants, and help bring attention back to the downtown area. 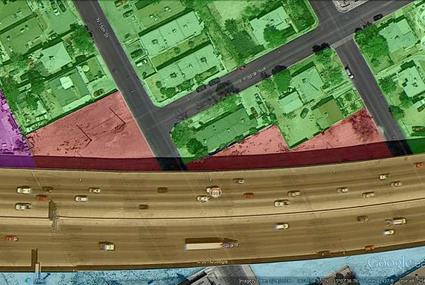 This empty lot is just outside the Las Vegas downtown area, in a residential area that has been r 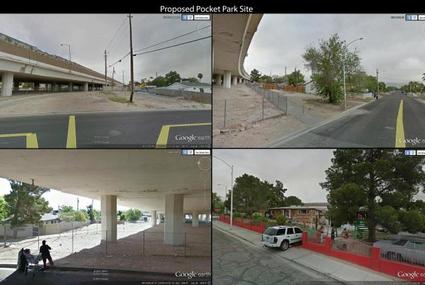 Above are four images of the site I have chosen and the surrounding community. 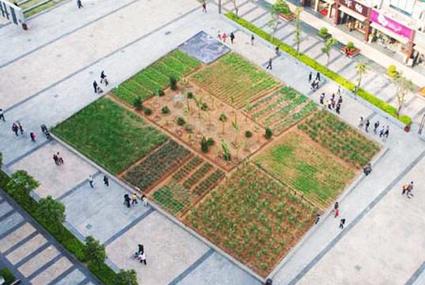 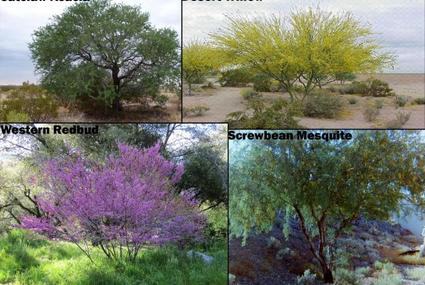 The desert has beautiful native plants and Las Vegas is no expectation. 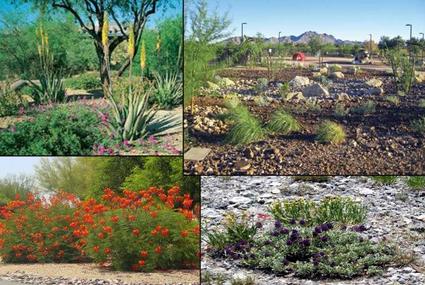 Below is a list of the Native plants to the Las Vegas area. 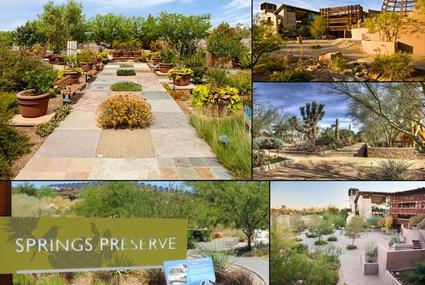 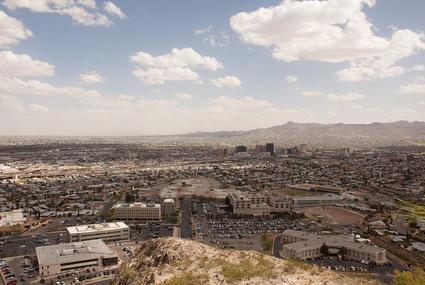 Urban sprawl is basically another word for urbanization.

Taking inspiration from the Springs Preserve I began to sketch out Ideas for the Proposed Park. Sketching out some details that will be a focal point of the park and sketching out the floor plan putting together the puzzle. Answer the question of where and how people will feel or act in certain areas of the tri-park. Arranging benches, grass area, water fountains, bike racks, shaded areas, and developing a way to store garden tools and crops. 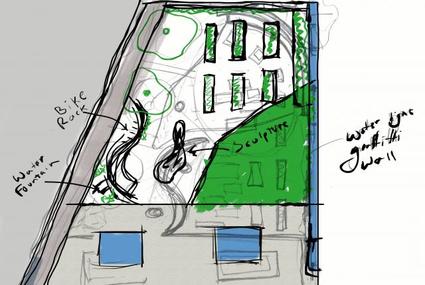 A quick sketch to quickly get ideas down. 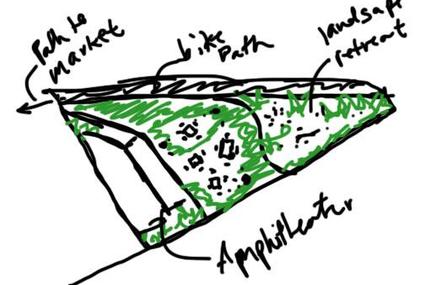 Here is a quick sketch of the entertainment area of the park. 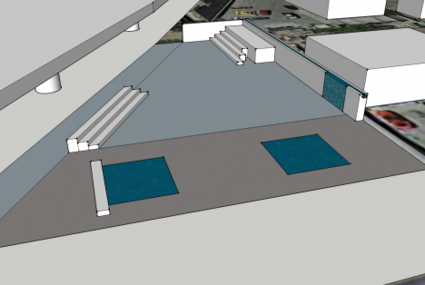 After I drafted a quick sketch i then went ahead and i tried to replicate the sketch, and to get 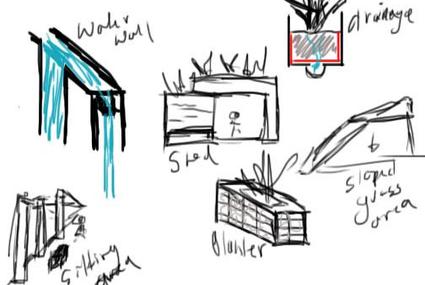 Here is sketches of a few details and ideas I will incorporate into my design. 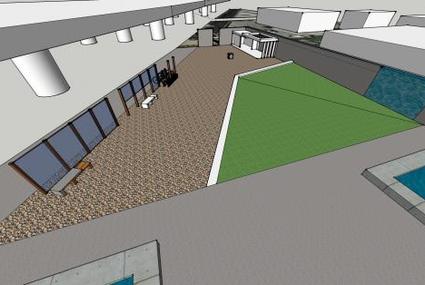 Here is another idea which i model into Sketch Up. 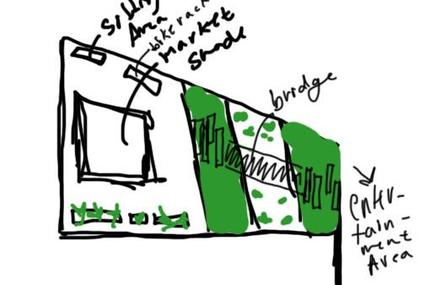 Here is a sketch of the urban market of the proposed pocket park. 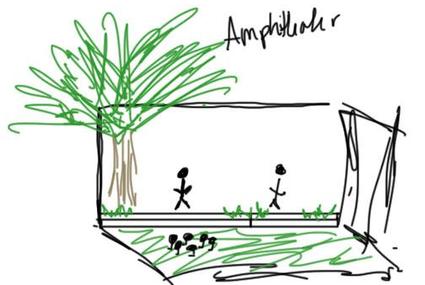 After sketching out ideas and completing piecing the puzzle together I then put my Ideas into Sketch Up to get an idea of scale and discover how each element feels and where such elements really want to be. Architecture is not controlling job it is a job in which the architect has to adapt to nature and the feeling of the elements the architect creates. Once I understood this concept I was better able to understand and create a flow to the proposed pocket park. Sketch Up allowed me to get a sense of scale and develop a more comprehensive design to what I am trying to create - community involvement center. 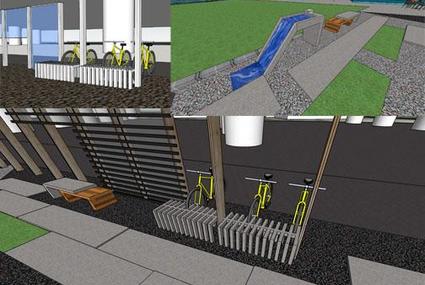 Here are some concept designs. 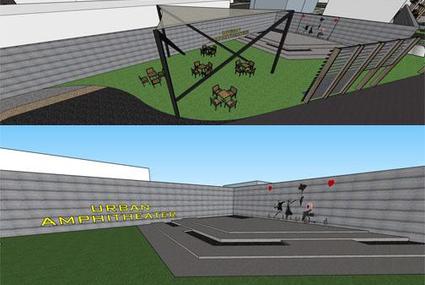 The images shown are going to be in the entertainment environment of the pocket park. 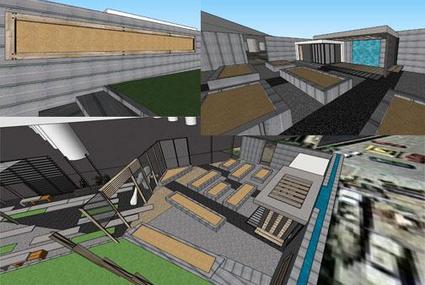 Here are concepts of the Urban farm. The first picture is a hanging herb garden. 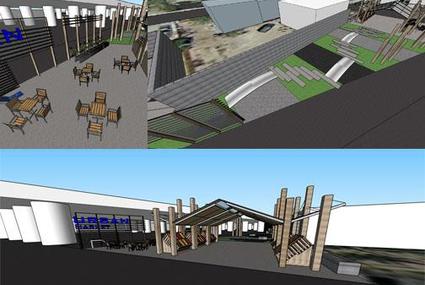 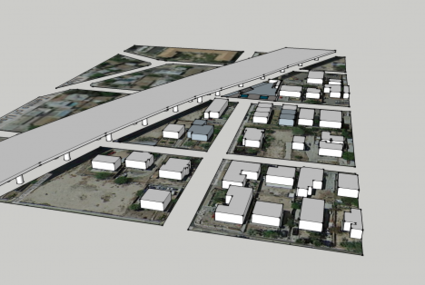 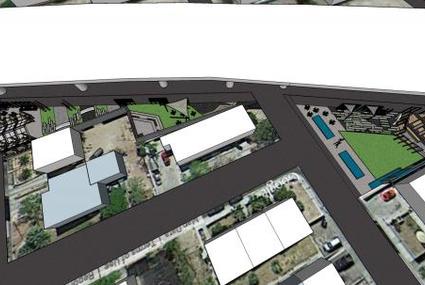 The above images help illustrates the flow of the three areas of the proposed pocket park. 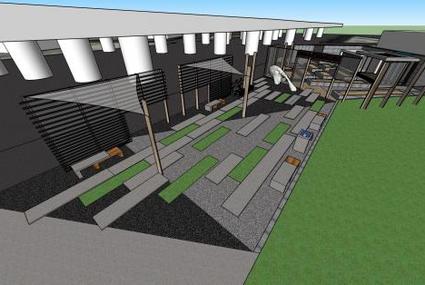 The above image show the interesting path to the urban farm from the street.

After I finished modeling my proposed pocket park I then but the model into Lumion (a fantastic rendering program that anybody can use and creates wonderful renderings). My final design consisted of three areas or I like to call them environments. The first environment is the Urban Market where people of the surrounding community can sell or barter their crops - they grew in their urban garden. The Urban market consists of a large shading structure that would shade the actual market with a little sitting area off to the side for people to enjoy the community and chat. The back half of the Urban Market is a landscape retreat with a path that leads to entertainment environment of the Tri-Pocket Park. The path consist of arched bridges that cross over the rock sections and concrete pads that run along the grass section. This makes for an interesting experience and contrast that will bring life to the current community. The second environment of the Tri-Pocket Park is the entertainment environment. The entertainment environment consists of a amphitheater, grass lawn, and a large shading structure. All the elements of the entertainment environment are made such that the community can hold gatherings, parties, encouraging community interaction. The top of the entertainment environment (look up from the Urban Market) is a landscape retreat that will show off beautiful and vibrant native plants to the Las Vegas area. The last of the three environments of the Tri-Pocket Park is the Urban Garden or farm. The urban farm is also made up of three elements. The first of those elements is the large grass area for children to play while parents use the urban farm and/or adults to relax. The lawn will slope upwards and be retained by a retaining wall, this is such to accommodate for flooding giving the water a direction to go rather than puddling and killing the grass. The second element is the path way to the urban garden, which consists of concrete pads mixed in with rock and grass rectangle areas to create a unique, interesting yet relaxing environment for people to relax, rest from riding their bikes down the path which runs adjacent to the park, and experience the vibrant native landscape around them. The last of the three elements of the urban garden is the actual urban garden. This consists of a shed/shaded deck and rows of containers for the community to grow vegetables and other healthy foods. The containers will be raised off of the ground to accommodate for flooding and the lack of nutrient soil in this area of Las Vegas. 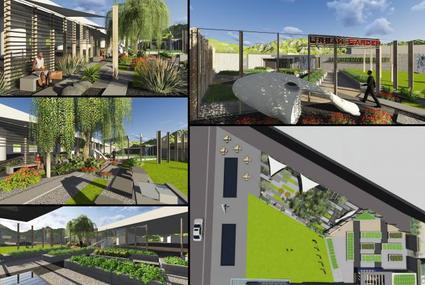 Out of the three environments in my proposed pocket park this is the Urban Garden section. 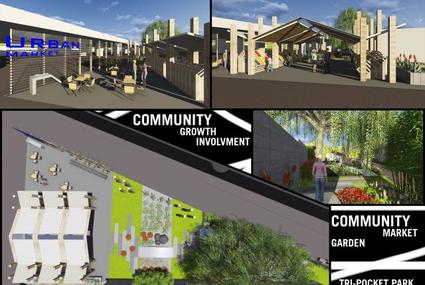 Out of the three environments in my proposed tri-park, this it the market area. 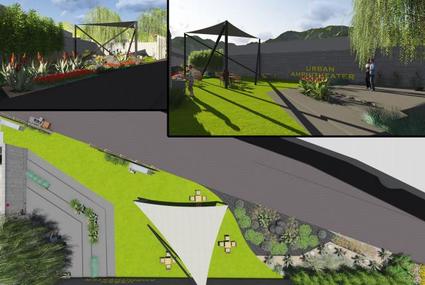 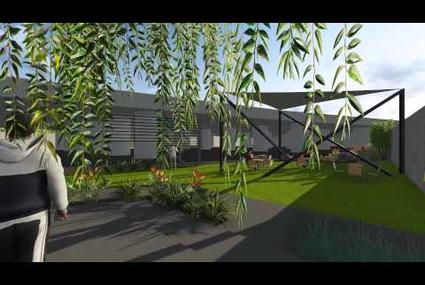 Here is a link to the animation I created of the proposed park in Lumion: https://youtu.be/ncaVQ2 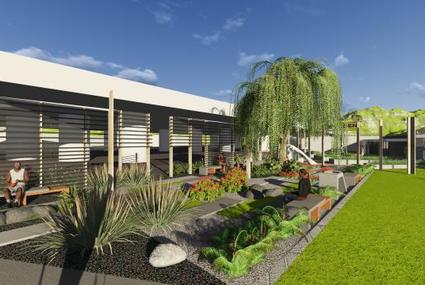 Here is a larger image of the pathway that leads to the Urban Farm. 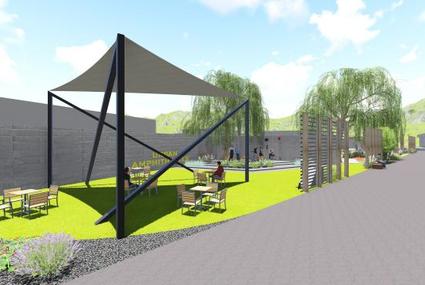 Here is a larger image that shows the simple yet interesting shading structure and amphitheater. 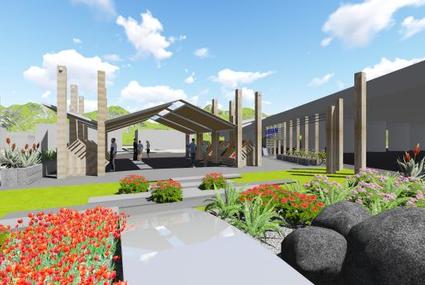