In major cities in America today, especially in New York City, there is a noticeable crisis in affordable housing for groups ranging from families to individuals unable to utilize low-income housing. However, most public housing complexes today are bland, obsolete, and not aesthetically pleasing for tenants. This project is aimed to provide an efficient and cheap way to design a truly affordable house for individuals and families. Specifically, Brooklyn's Bushwick neighborhood, where my prototype will be located, has problems with its current housing stock. Many houses are multifamily apartments built in the 1900s but have inadequate spaces for families. The few low-income housing developments in the area are made of bland brick material and appear aesthetically unpleasing. As a result, few housing units in Bushwick have private courtyards, balconies, or ample space. A low income neighborhood, Bushwick can benefit from a more distinct architectural style that meets residents' needs while remaining affordable.

In collecting information about affordable housing, I researched the neighborhood and surrounding area of my site. I also tried to interview locals about what they thought of the current housing stock and what they would desire in an affordable housing. In doing this, I wanted to see what my housing could provide to its residents that the surrounding area lacked. Specifically, I chose Bushwick as a place where I could design my affordable housing prototype, since it currently has inadequate affordable housing stock. A mainly low-income neighborhood, Bushwick, has seen its rents and housing prices increase, thus displacing low income residents. While Bushwick's housing prices range from $400,000 to $1,900,000, with rents from $1800 to $4100, the median income is $33,162, while more than half of residents spend over 30% of income on rent. Most of the houses, which are multifamily box dwellings from the 1900s, are aesthetically bland and are in poor condition. The few low income housing options available in the neighborhood are aesthetically bland and uninviting for residents. Bushwick also has a lack of private space for courtyards, balconies, or backyards, since these buildings have multiple floors but small housing space. There are a number of vacant lots and abandoned houses in Bushwick. I chose an abandoned house on my block, Palmetto Street, which is across from a large school. The house is conveniently located near several eating options, mass transit, ample parking, and public parks. It is also near a major neighborhood business and transit intersection, Myrtle-Wyckoff Avs. The dimensions of the lot are 20 ft x 70 ft. I began to choose my materials and design proposals by trying to get my housing price at least half the area's average rent, which is about $2000 per month, the average home value, about $778,000. I used the codes and requirements to construct an apartment in New York City, through concrete columns and walls, steel beams, and wooden flooring. 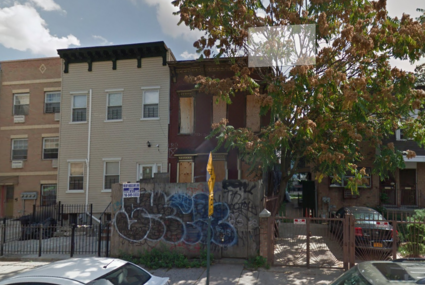 The house is located on Palmetto Street in Bushwick, across from a school building. 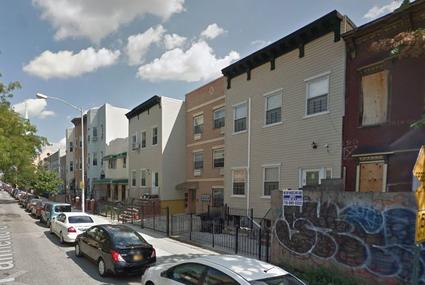 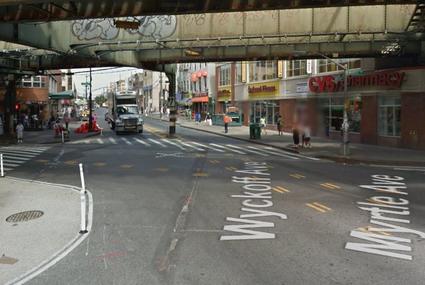 This major business and transit center, Myrtle-Wyckoff Avenues in Bushwick, is near the site of t 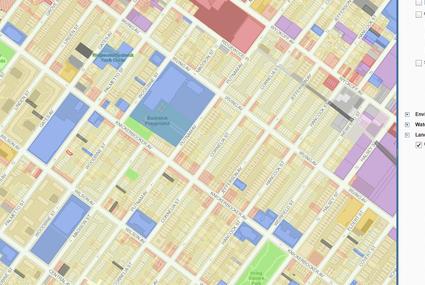 The lot's location is the red and white square next to the rectangular blue shape, on Palmetto St 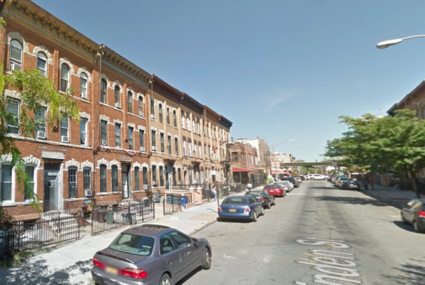 This is another typical image of Bushwick's housing stock, mainly comprised of multifamily apartm 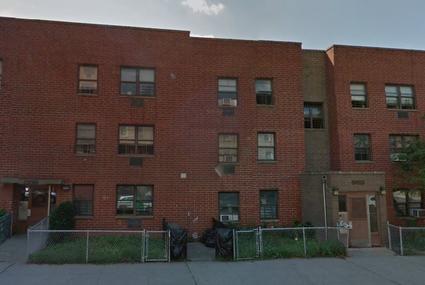 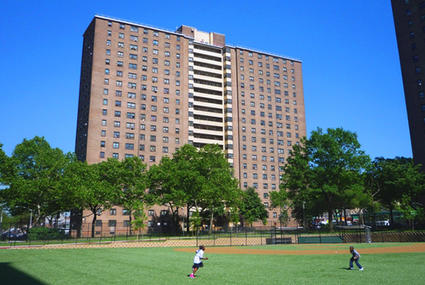 This is another major low income housing development in Bushwick, built in the 1950s.

Seeing that the current house in my location is abandoned, deteriorated beyond salvaging, and outdated for current housing needs, it will be demolished with a new building. Because Bushwick is dense in population, I thought about making a multifamily apartment or a mixed-use dwelling that copied the surrounding buildings in the area. However, I realized that it needed to be distinct and a new experience for the tenants. Additionally, Bushwick has lots of low-rise buildings, giving ample opportunity to utilize natural solar energy and light. Looking online at the examples of affordable housing as shown below, I hoped to focus on several main elements: energy and light efficiency, ample space for tenants, and plentiful amenities in the house. 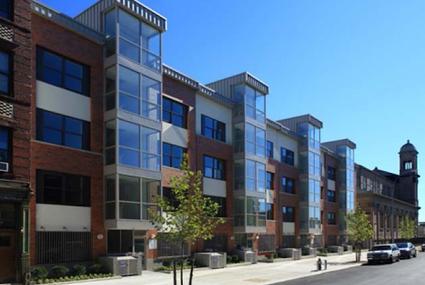 I drew some ideas for my affordable housing project from developments like these in Brooklyn, New 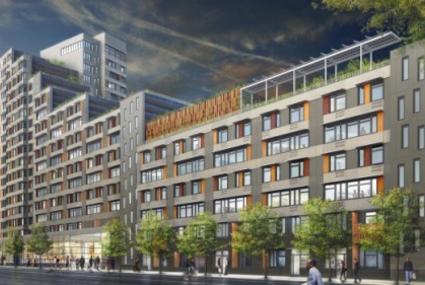 This picture of the Via Verde Apartments in the Bronx, an affordable apartment complex, served as

In finding a way to make my prototype as energy efficient as possible, I considered building a co 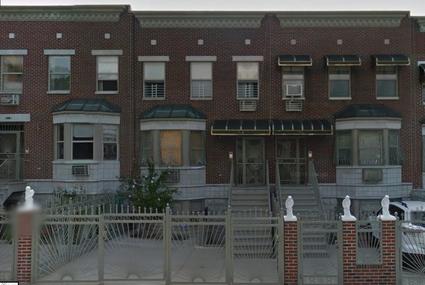 When I first tried to brainstorm my prototype, I sought to copy common architectural elements fro 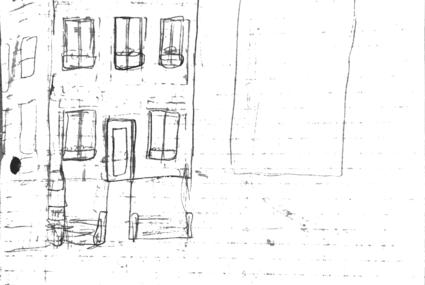 This was my first rough sketch of my prototype. 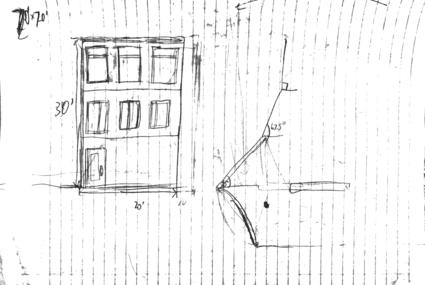 In this second version, I first explored the concept of a slanted glass wall and concave mirrors,

In finding a solution, I first honed into the exterior of the house. In following a plan to distinguish the building from the rest of the neighborhood but not to disconnect it altogether, I made my house three floors, but using a slanted wall in the front and back instead. At first, I considered installing concave mirrors to reflect sunlight and solar energy into the house, but I gave it up by simply making a slanted wall made of glass. I also designed the inclines of the walls for each floor such that all of them could receive the same amount of sunlight. I still focused on basing my house on a multifamily design, since Bushwick's large proportion of families made them a priority in housing. To provide some greenery, I designed balconies where small plants could be placed out front. 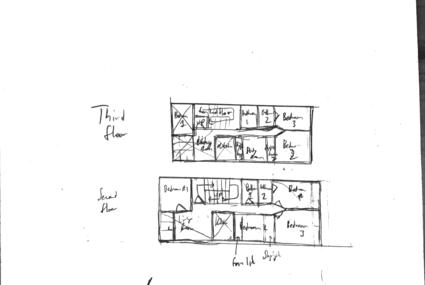 This was a rough draft of my first floor plan, combining single rent and family dwellings within 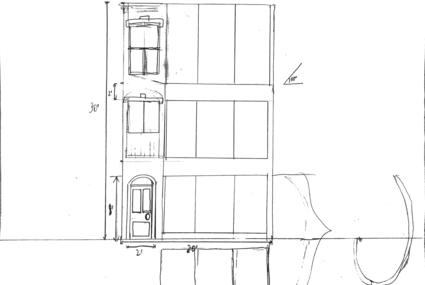 This was a rough sketch of my house's front area. 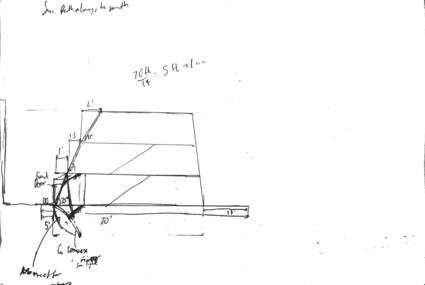 This is a rough sketch of my south elevation of my housing prototype.

In finalizing my housing prototype, I decided to structure my slanted walls such that they became more inclined as they progressed to the roof. Additionally, I made sure to provide ample natural light and architectural order by structuring my windows in a pattern. By adding mullions to the front glass windows, I was able to lower the maintenance costs. I also made my prototype a mixed-use building, catering to both single renters and families. Other than utilizing the basement for electricity, plumbing, and heating, I included a party/catering area so that any family or individual could share it as a community space, and I also put a storage area for any small maintenance or upkeep around the building. For the roof itself, I designed it out of grass with roof material at the bottom to ensure better storm drain removal and insulation while ensuring building stability. As for the balcony area, however, I morphed it into the general floor area as either a greenery area or a spot for relaxation, covered with curtain walls for insulation from extreme temperatures outside. 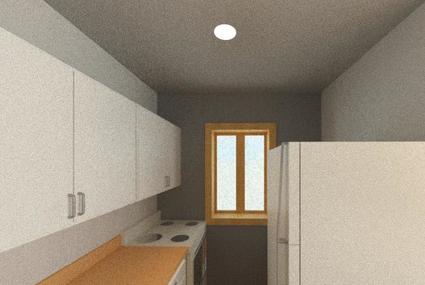 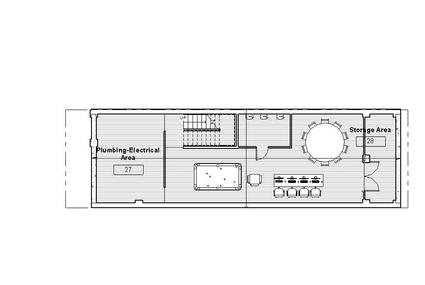 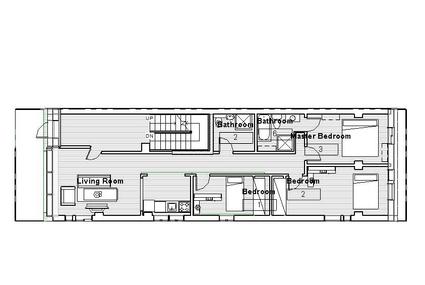 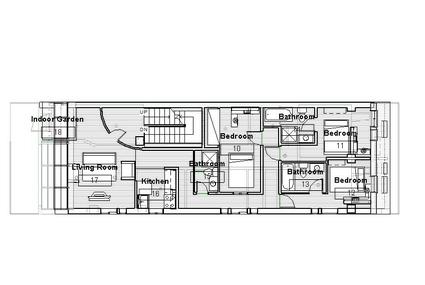 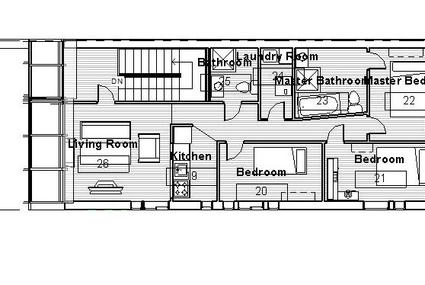 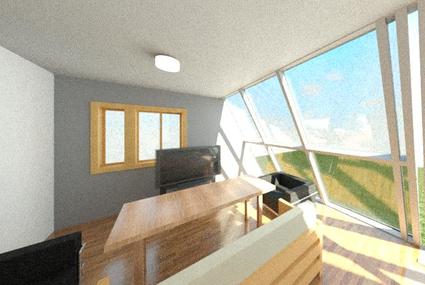 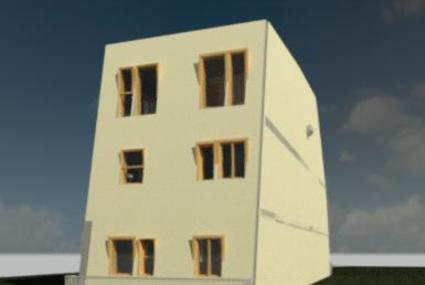 Back wall of house

The backside of the house is also slanted for natural lighting and storm drainage improvements, a 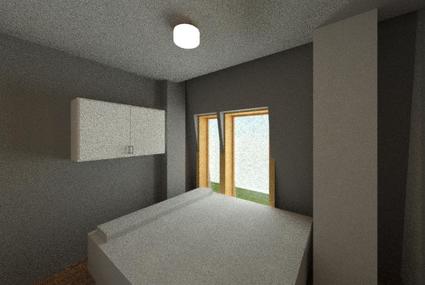 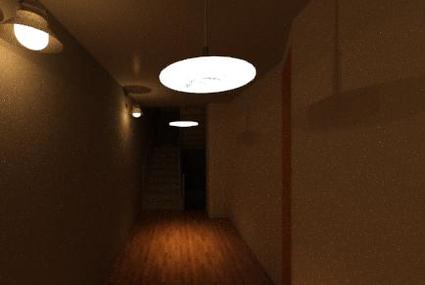 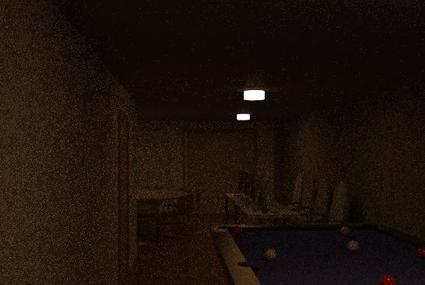 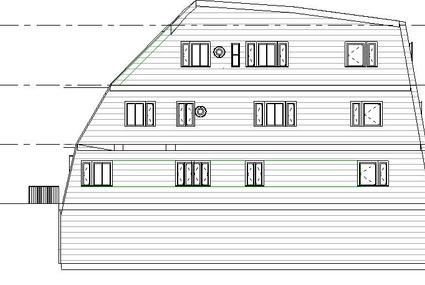