The Gary Comer Youth Center stands in the Grand Crossing neighborhood on the south side of Chicago. The building was designed primarily as the home for the South Shore Drill team - a precision performance troop made up of local teens who march in parades and at events.

At the request of Gary Comer, architect John Ronan also designed the new building to include many different spaces for kids and teens in the community to use after school, including: a gym, stage, art center, recording studio, dance studio, classrooms, gardens, library, and a kitchen.

The Center is named for Gary Comer, the founder of the Lands' End clothing company. Mr. Comer grew up in the Grand Crossing neighborhood in the 1930s and 1940s and attended nearby Paul Revere Elementary School.

When Gary Comer came to architect John Ronan in 2004 to begin the building project, it was originally planned give the South Shore Drill Team a place to practice. But in this tough Chicago neighborhood, many of the kids and teens did not have a safe place to go after school, so Mr Comer also wanted to do something for these students.

Plans for the building were soon expanded into a neighborhood youth center that provided after school programs, education, and a fun and safe place to hang out.

As John Ronan talked with the Drill Team leaders and with kids, he learned that many of them did not want the new building to include any windows, because they were worried about neighborhood violence and drive-by shootings.

The big challenge for the architect became: How do you design a building that is secure - without a lot of glass at street level - while also keeping the building light, airy, and fun? This building couldn't be a bunker. It needed to be a place that kids would want visit.

Ronan continued to interview the future users of the building - adult leaders and students - as well as Gary Comer himself. Ideas for the building became larger and complex as new spaces were planned. He and the architects in his office also visited the future site of the building many times, taking photos and measurements to better understand the existing conditions.

Once John Ronan and the other architects in his office had gathered information about the building's function and heard from the users about their needs, the early design work began.

This is a very iterative process in their office, involving lots of ideas that are constantly changing and being reviewed again and again. Ronan did quick sketches and the staff members built quick study models to understand the overall shape of the building. At the beginning of the process, they looked at many different schemes very quickly. Developing these 10 plans very quickly, allowed the design team to come up with many possible schemes. The first idea isn't always the best idea. 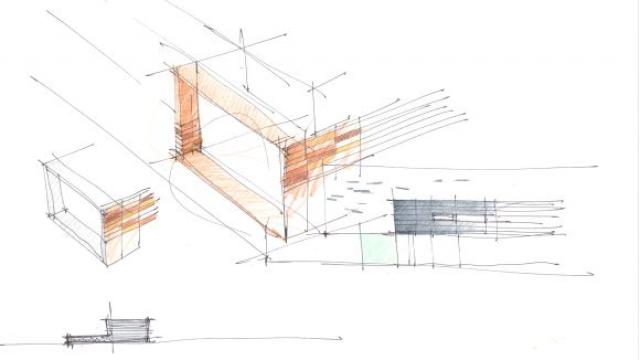 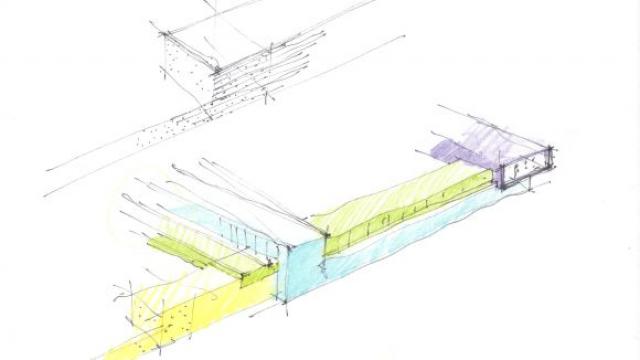 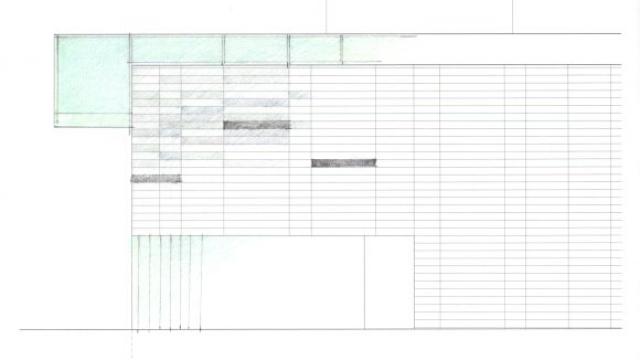 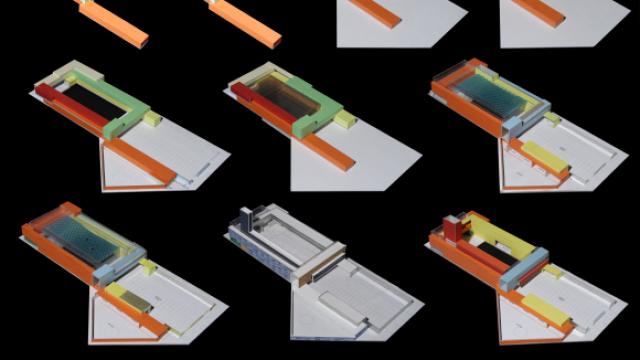 One of the biggest solutions that needed to be developed, was to determine the exterior materials of the building. The 'skin' of the building is one of the most distinctive features of the Gary Comer Youth Center.

As the client, Comer wanted the building to be constructed of brick. But Ronan felt that brick wasn't appropriate because he didn't feel it was special enough or had the right scale for such a large building with few windows.

In the end, red and blue fiber cement panels reinforced with glass fibers were used as the 'skin' of the building. Several schemes were developed to determine the overall size and pattern of the colored panels.

Not every part of the building is figured out at this stage of the design process. Detailed construction drawings of floor plans, sections, and details, for example, are not part of this step. (You can see these in the "Study the Construction Drawings" tab below.) 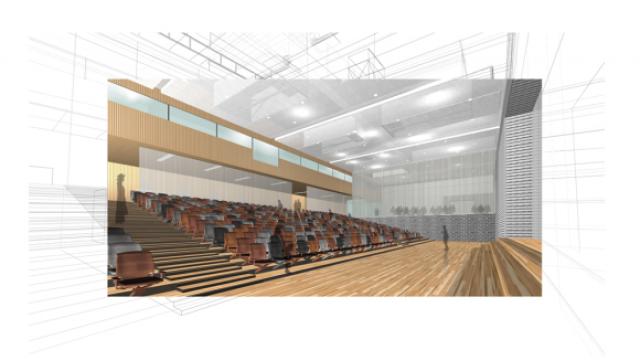 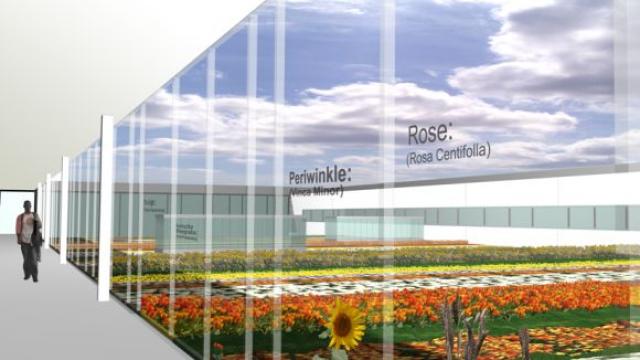 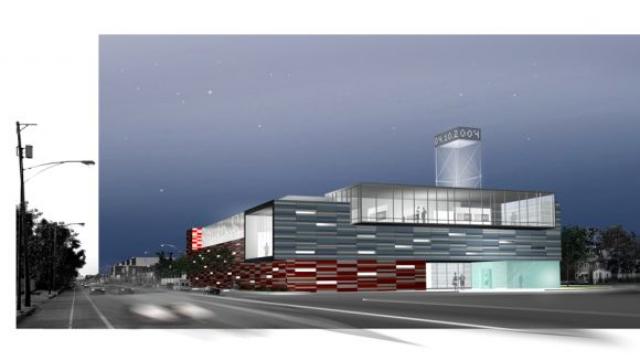 Plans for the building were constantly changing and the architects frequently talked with the owner and the users to hear their feedback. In the end, the architects narrowed their schemes to four and then presented these to Gary Comer for review.

Finally, the one that made the most sense for the users was to place the Drill Team practice space in the middle and wrap the other functions around the outside. 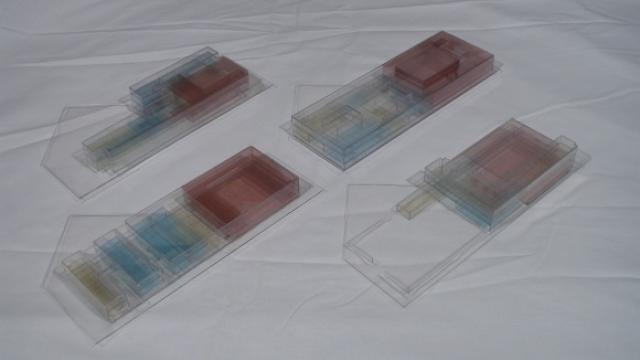 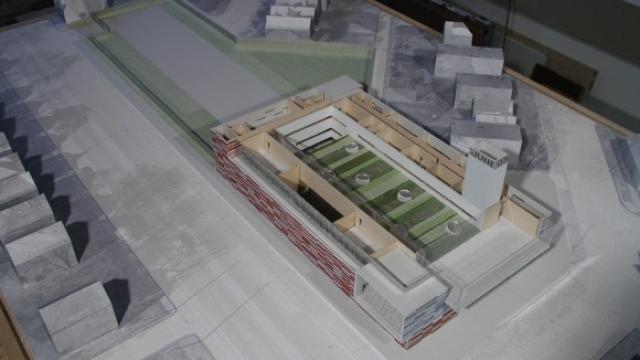 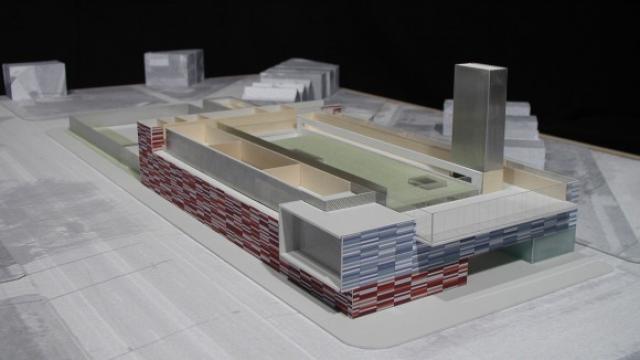 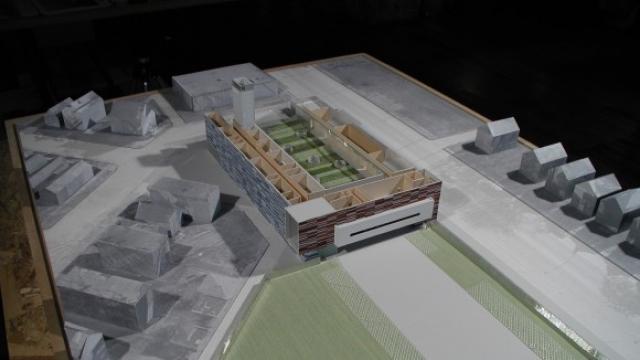 The final design for the building is bright and colorful, signaling to the community residents and kids that this is a safe, inviting, and fun place to be.

At night, the building looks very different because the tiny slit windows glow and appear to punch through the skin of the building. While the sidewall level walls are more solid, the upper floors have much more glass. These rooms - the dance studio, the art studio, and a few classrooms - have lots of natural light.

A large open space in the center of the building has two main functions. Auditorium seating facing a stage can be retracted into the wall to free up space for the gym and drill team practice. 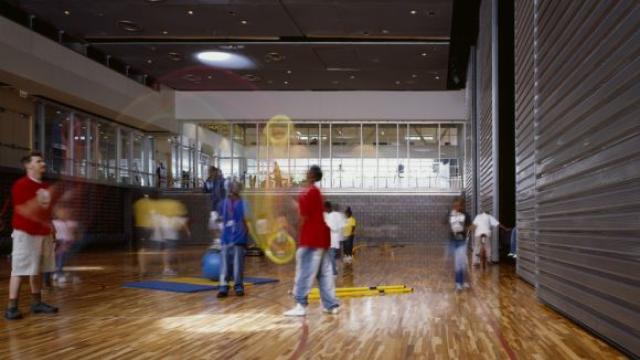 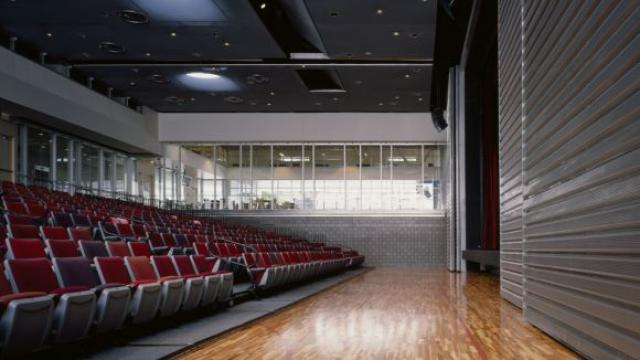 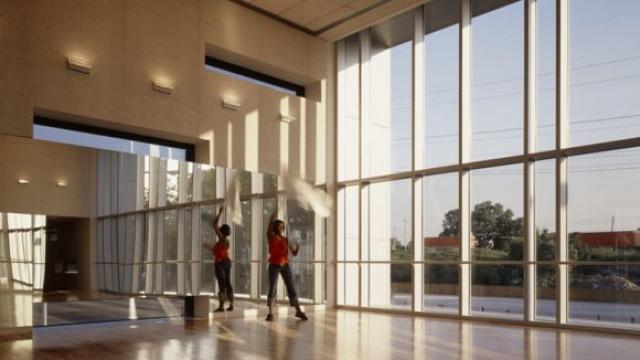 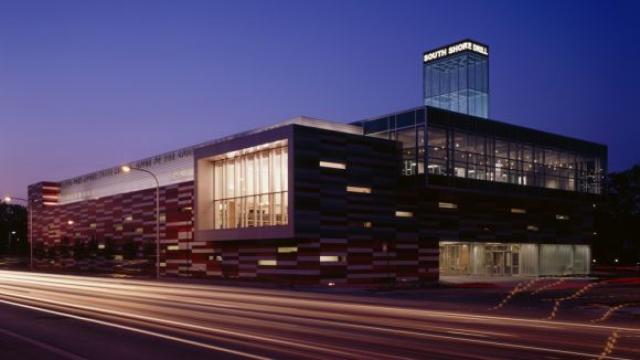 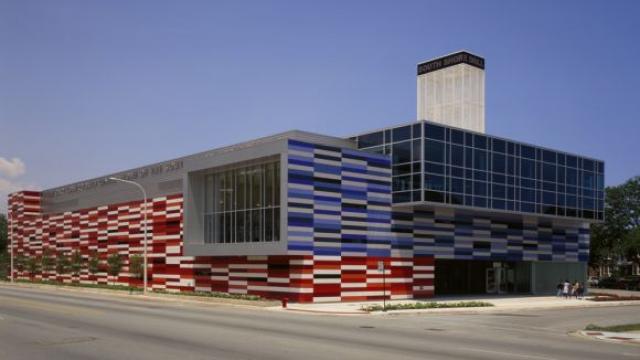 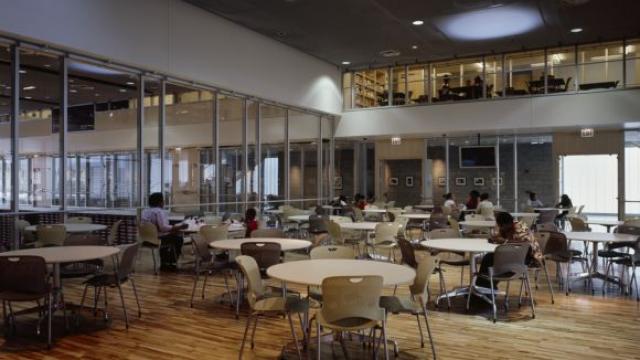 The steel skeleton of the building is constructed first. Then, structural concrete panels create the walls. Insulation is added next, followed by glass and the brightly colored fiber cement panels that hang off the steel frame.

On the roof garden level, the concrete structure is covered with a waterproofing membrane before the earth fill is added. 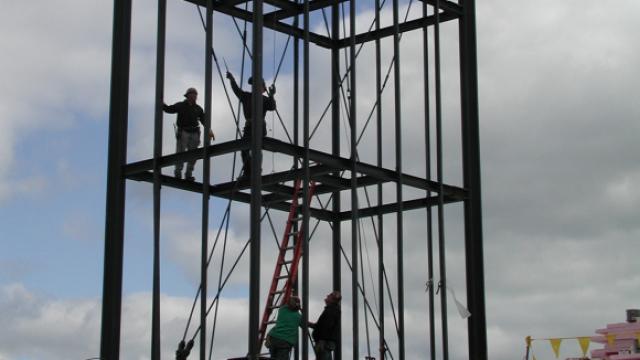 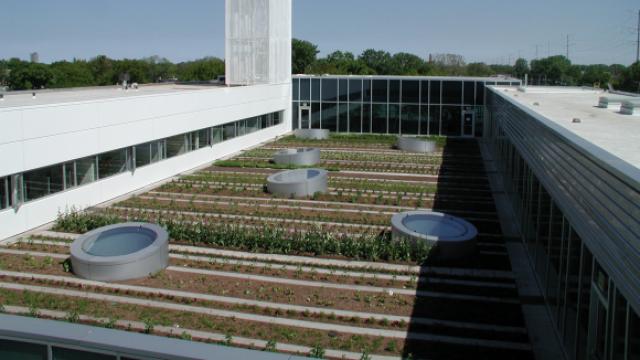 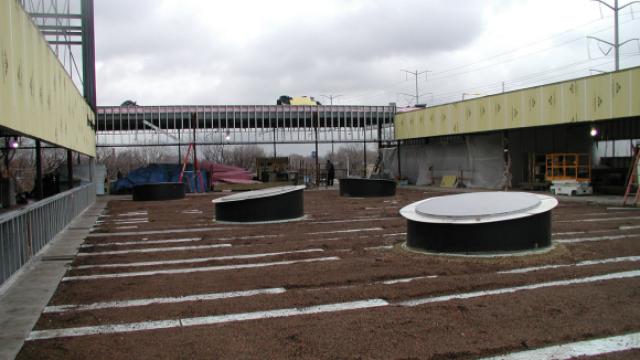 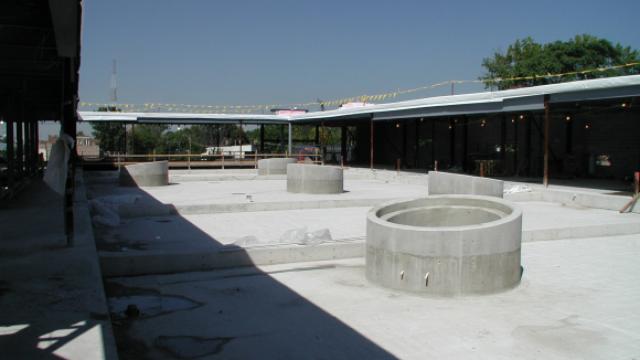 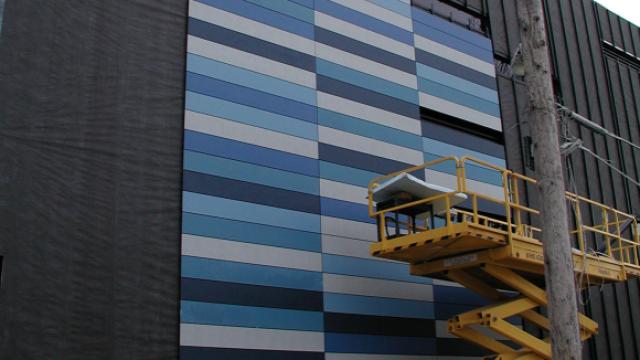 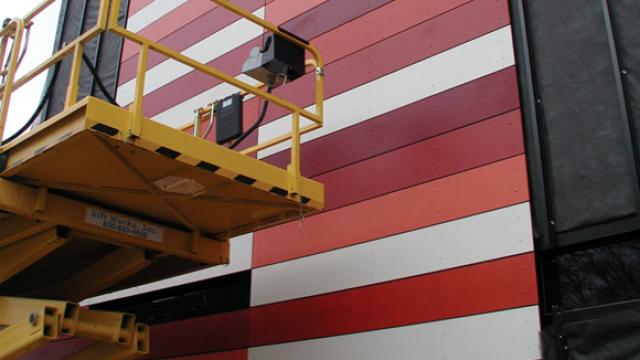 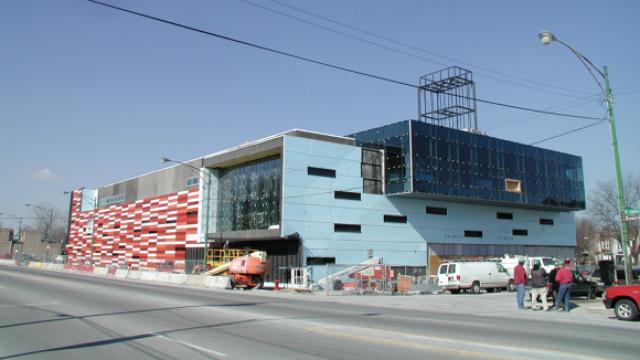 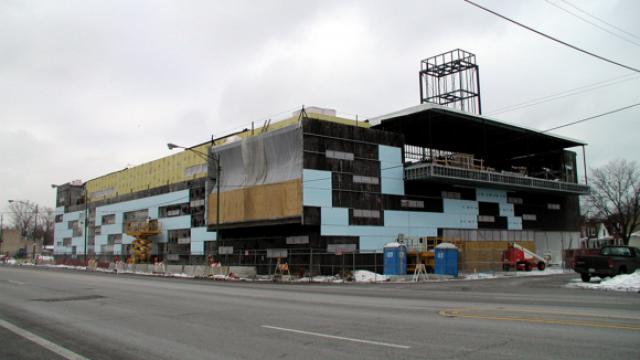 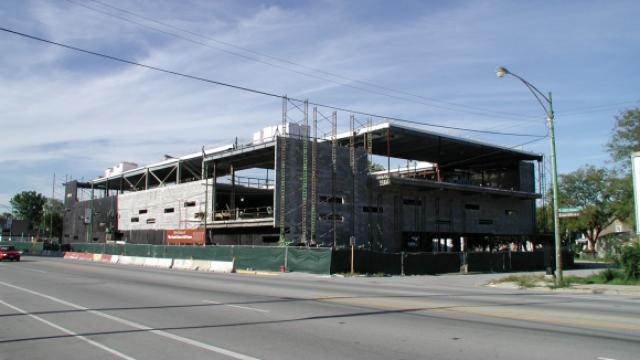 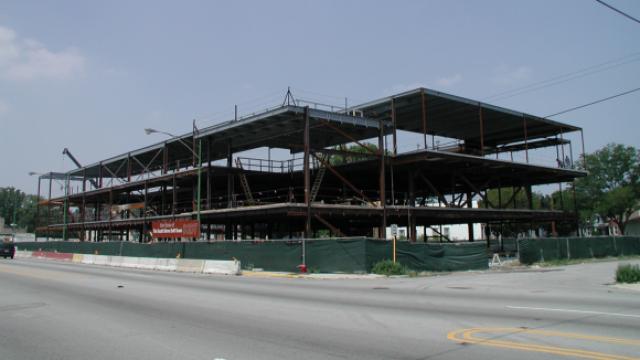